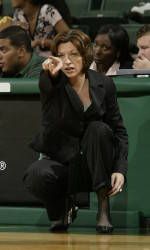 “This recruiting class represents a great deal of hard work from my staff, in particular, Darrick Gibbs – this class’s coordinator,” Meier said. “These four young ladies have a strong belief in our vision for MIAMI BASKETBALL, and they want to be a part of something special. All of them feel privileged to be a part of THE U family, and that means a great deal to us here.”

Bullock, a 6-foot-1 forward out of South Anchorage High School, averaged 22 points and 12 rebounds as a junior. She was named second team all-state by the Anchorage Daily News/Alaska Media. Bullock earned all-conference honors as a junior. She helped her team to the state tournament as a freshman and sophomore.

“Sylvia brings that versatility and athleticism that we love in our forwards,” Meier said. “She has tremendous balance and leaping ability, and is very hard-nosed around the basket. Her length and speed in the open court make her quite dynamic. We particularly like her explosiveness to the ball, which makes her the resilient rebounder that we were looking for.”

Johnson, a 5-foot-11 guard out of Rush-Henrietta High School, is rated the 16th best player in the country by Hoopgurlz.com. She is the top rated player in the state of New York according to Big Apple Recruitings. Johnson is a first team all-state AA selection by the New York State Sportswriters’ Association. She was the 2007 Democrat and Chronicle All-Greater Rochester Player of the Year. She earned Street & Smith All-America honorable mention. Johnson averaged 22 points and 16 rebounds as a junior at Rush-Henrietta.

“Shenise (Moe Moe) is one of the highest rated recruits to ever sign at Miami,” Meier said. “She is a multi-dimensional player with the size and skills to be threatening at every spot on the floor. Her scoring numbers are impressive, but her rebounding is what really makes her special. She is smooth, versatile and determined, and will have an immediate impact on this program. She is a “gamer” who has proven to play big in crucial games, and she will be a huge part of this program’s future success.”

Stringer, a 6-foot-4 post player from Miami Southridge High School, has been playing basketball for only three years. She averaged 12.6 points and 8.0 rebounds as a junior.

“Jazzie gives us the size and speed we need on the inside,” Meier said. “She is an impressive athlete whose best basketball is definitely ahead of her. I have no doubt that she will emerge as an impact player, and a force to be reckoned with.”

Williams is a 5-foot-7 guard from Pahokee High School. She is ranked in the top 20 in the country at her position. She was named the 2006-07 Palm Beach Post Small School Player of the Year. She was a second team Class 3A all-state selection by the Florida Sports Writers Association as a junior. She earned honorable mention all-state as a freshman. Williams averaged 34 points, 12 rebounds and nine steals last season.

“Riquna (Bay Bay) is one of those electrifying players who is threatening on both ends of the court,” Meier said. “She makes an impact on almost every play and has an intensity and drive to be great that transcends her game. We truly feel like she is one of the top players in the country and are very fortunate to keep her home.”

Averaged 22 points and 16 rebounds per game; For her career averages 19 points and 14 rebounds – 1,578 career points in 84 gamesRated the 16th best player in the country by Hoopgurlz.comBig Apple Recruitings No. 1 player in the state of New YorkNamed first team all-state in AA by the New York State Sportswriters’ AssociationMVP, Section V in 20072006 & 2007 Player of the Year, All-Greater Rochester by Democrat and Chronicle2006 second team all-state selection by NYSWASet New York State Public High School AA single-game tournament record with 30 points and 19 rebounds in 2006Had a state AA record 31 rebounds in a tournament in 2006Street & Smith All-America Honorable Mention2006 Metro (Rochester) Player of the YearHad a 42-point performance against NYC powerhouse St. Michael’sMonroe County Division I Player of the YearTwo-time New York State Tournament MVP5th team All-American by the Sporting News for 2007-08

“Shenise Johnson is one of the most physically imposing guards in this class – and maybe a couple others. She is strong and explosive. She doesn’t try to ‘And1’ her defenders with a multitude of tricks – just one good move to get the defender off balance and then muscle through by attacking the hips. Then the powerful finish. Classic stuff. She has a good mid-range game with developing deep potential, plus knows how to make plays, whether for herself or her teammates. She has tools defensively and works the glass. She’s going to make the Hurricanes blow harder for the next four years.”

Averaged 12.6 points and 8.0 rebounds per gameRanks among the nations top 100 centers

“Jazmond Stringer is an athletically gifted player who within the next couple of years could develop into one of the best post players in the country.”

“Jazmond Stringer gives the Hurricanes size and a physical presence in the paint as well as a promising upside. Stringer has recently emerged on the national scene and Miami has gained a low-post player that impacts sooner than later.”

Averaged 34 points, 12 rebounds and 9 steals as a juniorTop 20 in the country at her positionNamed 2006-07 Palm Beach Post Small School Player of the Year2007 second team, Class 3A all-state selection by Florida Sports Writers AssociationEarned honorable mention all-state as freshman in 2005Ranked No. 31 combo-guard nationally by the Collegiate Girls Basketball Report.

“Riquna Williams is one of the best kept secrets in the country and is going to surprise a lot of teams in the ACC. She will make an immediate impact as a freshman. “

“Riquna Williams brings a scorer’s mentality to the backcourt with a physical, slashing game and three-point consistency. “