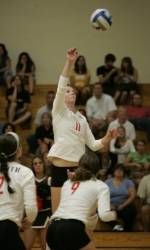 CORAL GABLES, Fla. – Hurricane volleyball continues its road trip this weekend as the team concludes the first half of the Atlantic Coast Conference season with matches at N.C. State Friday, Oct. 19 and at North Carolina Saturday, Oct. 20.

After getting out to an 8-4 start through their first 12 matches, the `Canes have struggled as of late and have dropped their last six matches, all against league opponents. Currently 8-10 overall and 2-7 in the league, Miami is looking to use this weekend to get back on track and head into the ACC season’s second half on a winning note. The weekend starts in Raleigh on Friday night when the Hurricanes and the Wolfpack (3-16, 0-9) square off in Reynolds Coliseum at 6 p.m. before UM turns around the next day to face the Tar Heels (8-10, 4-5) in Carmichael Arena at 6 p.m. on Saturday. Both matches can be seen via ACC Select at www.ACCSelect.com.

In addition to the usual contributions of Genny Mayhew, Ciara Michel, Bridget Bomhack and Ashley Woods on the offensive end, Angelica Ellis has come on as of late for UM. In the last three matches against Georgia Tech, Boston College and Maryland, Ellis has recorded 22 kills in 11 games after recording just 32 kills in 31 games in the team’s first 15 matches this season. Maria Andersson has also stepped up her game the last few weeks, nearly averaging a double-double with 8.67 kills per game and 9.00 digs per game over the last three matches.

About N.C. State
The Wolfpack have dropped 15 straight matches dating back to Aug. 25 when the Wolfpack beat Loyola, 3-1, in Durham, N.C. at the North Carolina Central Tournament. The Wolfpack offense runs mostly through Lauren Zaniboni, who has 221 of her team’s 865 kills this season. She is averaging 3.20 kills per game, hitting .171 on the season and ranks second on the team with 41 total blocks. The duo of Chrissy Zirpolo and Keri DeMar join Zaniboni as the only three Wolfpack to have reached triple-digit kills this season, recording 128 and 124 respectively. Alex Smith (8.26 apg) and Allison Davis (4.67 apg) share the setting duties, Nikki Sweet leads the team with 208 digs (3.10 pg) and Ashley Wallace is the top force at the net, averaging 1.06 blocks per game.

About North Carolina
The Tar Heels have won three of their last five matches, with victories against Boston College, Wake Forest and Virginia Tech and losses to No. 13 Duke and to Virginia in their most recent match this past Sunday. Five different players have reached triple-digits in kills for UNC with Lauren Prussing’s 190 leading the way. Christine Vaughen, who ranks second on the team with 159 kills, leads the club with a .341 hitting percentage while Stephanie Jansma sets up the Tar Heel offense averaging 11.06 assists per game, the fourth-highest average in the conference. Defensively for UNC, Brianna Eskola averages a league-best 5.68 digs per game while Heather Brooks and Vaughen lead the Tar Heel efforts at the net with 96 and 74 total blocks respectively.

UM won both match-ups against N.C. State last season while the Tar Heels went 2-0 against the Hurricanes. Miami defeated N.C. State, 3-1, when the schools met in Coral Gables, Oct. 6, before it shut out the Wolfpack late in the season in Raleigh, 3-0. The Tar Heels won 3-0 in Chapel Hill in the team’s first meeting of ’07 before coming away with a 3-1 at the Knight Sports Complex Nov. 17 against the `Canes. Miami has won all six meetings with N.C. State in the all-time series between the two schools while it holds a slight 6-5 edge over UNC in 11 match-ups all-time.

After the weekend in North Carolina, the Hurricanes will begin their second-half of the league schedule when they return home for three home matches starting with Florida State, Tuesday, Oct. 23 at 7 p.m.