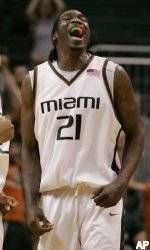 Also slated to appear in San Juan are Temple, College of Charleston and Houston.

Presented by ESPN Regional Television and ESPNU in conjunction with the Puerto Rico Tourism Company, all 12 games of the four-day tournament will be featured on ESPN2 or ESPNU including Miami’s first-round match-up with Marist which will be broadcast on ESPNU at 11:30 a.m.

For ticket information please contact the Hurricane Ticket Office online at www.hurricanesports.com or by calling 1-800-GO-CANES.