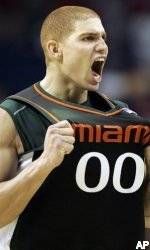 Also featured on this year’s schedule will be a three-game swing at the ESPN Puerto Rico Tip-Off Classic Nov. 15-18 in San Juan, Puerto Rico. Along with UM, this year’s tournament field will include Arkansas, College of Charleston, Houston, Marist, Providence, Temple and Virginia Commonwealth.

The Hurricanes will also make at least 21 television appearances including a nationally televised contest on ABC Feb. 2 at Duke.

“We are extremely excited about this year’s schedule,” said Haith. “Having the opportunity to play against some of the best teams in the country game-in and game-out will definitely be a challenge, but it’s a challenge we look forward to.”

The Hurricanes open the season Nov. 10, hosting in-state counterpart Florida Southern – one of six Florida-based opponents on the schedule – at the BankUnited Center.

Miami returns home from a Dec. 13 match-up with 2007 NIT semi-finalist Mississippi State in Starkville, Miss. to take on Stetson (Dec. 17), North Florida (Dec. 20) and North Carolina A&T (Dec. 23) before squaring off with Winthrop, who advanced to the second round of the 2007 NCAA Tournament and concluded the season ranked No. 22, Dec. 29 at the 2007 MetroPCS Orange Bowl Classic in Sunrise, Fla.

Wrapping up the non-conference schedule Jan. 2 against Penn, the Hurricanes open the ACC schedule at home Jan. 12 against Georgia Tech.

For ticket information, please contact the Hurricane Ticket Office at 1-800-GO-CANES or visit online at www.hurricanesports.com.