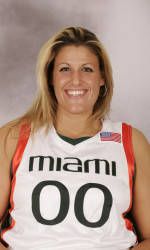 To be eligible for consideration, a student-athlete must have earned a 3.0 grade point average for the previous semester and have maintained a 3.0 cumulative average during her academic career.

Audibert, a 6-3 center, started 21 games for the Hurricanes in 2006-07, averaging 1.7 points and 2.1 rebounds in 12.2 minutes an outing. She was the recipient of the Coaches Award at the team’s postseason banquet. Miami’s only four-year player last season, Audibert was the last Hurricane in the women’s basketball program to have played in both the BIG EAST and ACC Conferences and in both the NCAA and WNIT Tournaments.

A team co-captain known for her boundless enthusiasm and school spirit, Audibert graduated in May with a bachelor’s degree in sports administration.