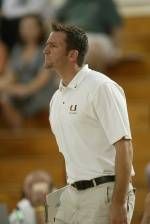 Coral Gables, Fla. – The United States Volleyball Association (USVA) has selected University of Miami women’s volleyball assistant coach Matt Botsford to serve on the coaching staff for the USA Volleyball Girls Select A1 team in July, it was announced Friday.

The USVA announced their roster for its Select A1 program, the top program USAV offers for volleyball players born in and after 1992.

“I am very excited about the opportunity to work with the USA Volleyball program”, Botsford stated. “I look forward to coaching along-side the wonderful staff they have assembled.”