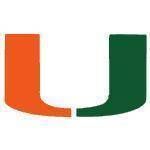 Eight members of the <?xml:namespace prefix=”st1″ ns=”urn:schemas-microsoft-com:office:smarttags”?>University of Miami sports family were inducted into the UM Sports Hall of Fame Thursday, April 26.  The 39th annual induction banquet was held at Parrot Jungle.

The eight inductees were:

Head diving coach at UM since 1989…named NCAA Coach of the Year nine times…had a steak of 11 straight years when at least one Hurricanes diver won an NCAA title.

Currently the pitching coach of the UM baseball team…played at UM from 1994 to 1997…four year starter…finished his career as the all-time leader in wins (43) and starts (72)…as a freshman, won nine games and lost only one…as a sophomore, went 11-3…compiled a 12-1 record a junior and an 11-4 mark his senior season…his number 33 was retired in 2003.

Scored the winning touchdown in the Hurricanes 1983 Orange Bowl victory over Nebraska which lead to the school’s first national championship…started his career as a walk-on and later earned a scholarship…led the team in rushing his senior season…played eight seasons in the NFL, seven with the Indianapolis Colts and one with the Pittsburgh Steelers.

One of a long line of outstanding linebackers at UM…led the team in tackles in 1988, 1989 and 1990…second team all-american in 1988…first team all-american by several major publications in 1990…that same year was a finalist for the Butkus Award given annually to the nation’s top collegiate linebacker…member of two national championship teams…also played baseball at UM.

As a freshman in 1991, set a school record for appearances with 27…had a spectacular junior year posting a 0.89 earned run average and leading the NCAA with 21 saves…drafted on the fourth round by the Cleveland Indians in 1994…played 11 seasons in the major leagues recording 172 saves including as a member of the Cincinnati Reds in 2004…named to two MLB all-star games (2000 and 2004).

Played for the Hurricanes from 1959 to 1963…a seven-footer who was known as a big man who could shoot…lead the team in rebounding in 1961-62…UM’s leading scorer in 61-62 and 62-63…over those two seasons scored 1032 points and pulled down 682 rebounds…led his teams to two NIT appearances (1961 and 1963)…the 21st player selected in the 1963 NBA draft (by Detroit Pistons)…also a member of the Indiana Hall of Fame…a tremendous high school player who was Indiana’s Mister Basketball in 1958.

Big East Player of the Year in 1993…named MVP of the Big East Championship game that year…a member of the Hurricanes undefeated Big East team in 1991-92…finished her career compiling 1404 points and 857 rebounds…an honorable mention Kodak all-american in 1992 and 1993…played professionally in Israel and Turkey as well as in the ABL.

Had a tremendous senior season in 1995…named Big East Player of the Year, an all-american and to the Big East all-academic team that year…also won the Rolex Southeast Regional Championship that season and was ranked number three in the nation…played professionally after college competing at Wimbledon, the Australian Open and as a member of the British Federation Cup team…was the number one ranked player in Great Britain 1996 and ranked in the top 150 world-wide.