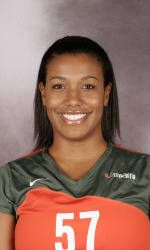 Senior setter Jill Robinson garnered the Most Valuable Player Award to close her career after she became the first UM player to surpass the 4,000 career assists mark, with a record 4,937assists. For the 2006 season, Robinson captured a total of 1,222 assists averaging 10.44 per game. She posted double digit assists in the 117 games she played and started in 2006, and captured 15 double-doubles along with a triple-double. The Merced, Calif. native also became the Hurricanes’ all-time assists per-game leader with an 11.54 career average, and ranks second with 1,001 career digs.

Defensive specialist, senior Ann Gallo, finished the season with two honors, beginning with the 100% Award, the second one of her career. The award, voted on by teammates and coaches, is given to the player who exemplifies a dedication of 100% day in and day out. Gallo also received and the Academic Award, going to the player with the highest GPA over the course of two semesters during the season. The Wheaton, Ill. native played in all 119 games, and finished the season with 383 digs (2.84 per game) and 31 service aces. She has the fourth-highest career record of 878 digs, and is the third all-time leader with a career average of 2.74 digs per game. Off the court, Gallo, a marketing major, posted a 3.925 grade point average during volleyball season, and a perfect 4.0 for the spring, notching the highest in both semesters.

Junior outside hitter Ashley Woods was also given the 100% Award. After seeing playing time in 109 games, Woods posted 225 kills for a 2.06 kills per game average. The Round Rock, Tex. native finished the 2006 season third in three categories including kills with 225 total, blocks with 76, and finished with a total of 268 points.

Freshman middle blocker Lici McGee earned Most Improved Player honors. The award, selected by teammates and coaches, is given to the player who has made the biggest improvement throughout the course of the season. The Warr Acres, Okla. native played in 30 games and posted 34 kills (1.13 kills per game), and tallied 1.50 points per game. McGee’s improvement was evident after she posted a personal high of nine kills, and tacked on three digs, three block assists and finished with 11.5 points against Georgia Tech November 11, 2006.

Outside hitter senior Sarah Duncan received the Most Inspirational Award. The award, selected by teammates, is given to the player who inspires teammates to be the best players and people they can be. Duncan closed her career at Miami with 314 total kills and a total of 347 points. The Naples, Fla. native had a career average of 1.65 kills per game and 1.83 points per game average.

Junior defensive specialist Michelle Bruin earned the Unsung Hero Award. The award, as voted on by teammates and coaches, is given to the player who demonstrated a hard work ethic but went more unnoticed in terms of recognition on the team. On the season, Bruin posted the third-highest mark in assists with 51 total, while sitting fourth on the roster in 2006 with 219 digs and an average of 1.90.