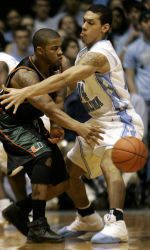 Hurricanes Fall To No. 3 Tar Heels

Wayne Ellington scored 14 points for the Tar Heels (20-2, 6-1 Atlantic Coast Conference), who won their fifth straight game. North Carolina shot 56 percent – including 61 percent after halftime – and hit 12 of 24 3-pointers to cruise to another league win by a double-digit margin.

Anthony Harris scored 18 points for the Hurricanes (9-13, 2-6), who have lost five straight games – all in the league. Four of those five have come by at least 19 points.

By the end, 12 players had scored and five reached double figures, and the Tar Heels finished with 26 assists. North Carolina led by 17 points at halftime and pushed that to as many as 43 points after the break with a series of transition scores that kept the home crowd energized.

The Tar Heels also got a boost with the return of sophomore guard Bobby Frasor, who had missed the past four games with a right-foot injury. Frasor was scoreless with two assists in 9 minutes.

Miami coach Frank Haith was ejected after being whistled for his second technical foul after reacting to a no-call on a block by Hansbrough with 7:48 left. The call came just before an official timeout and the Tar Heels leading 73-51, allowing Haith to walk to the Tar Heels huddle and shake coach Roy Williams hand before leaving the court.

The Tar Heels led 33-23 when they got a spurt just before halftime to build a comfortable margin. Ellington hit a pair of 3s in the final minute, while Danny Green added two free throws to give the Tar Heels a 41-24 lead at the break.

North Carolina put it away with a dazzling 3-minute spurt early after the break, going on a 15-3 run fueled by its lethal transition game. Ty Lawson and Wes Miller each knocked down 3s, while Quentin Thomas – who finished with a career-best eight assists – assisted on layups by Deon Thompson and Marcus Ginyard to make it 62-35 with 12:23 left.

The Tar Heels poured it on the rest of the way, cracking the 100-point mark on a 3-pointer from reserve Dewey Burke with 1:10 left.