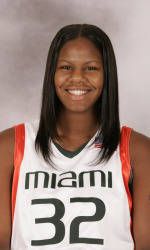 “We wish Brittany the best in her basketball future,” said Coach Meier, who is in her second season at the helm of the Hurricanes program. “I believe the team will make the proper adjustments and positively move forward with confidence.”

Denson started 16 of 17 games played in 2006-07, averaging 8.4 points and 6.9 rebounds per game. The native of Winter Haven, Fla., had returned to the court after a torn ACL cut short her freshman campaign 22 games into the season.