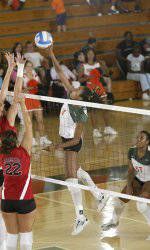 Hurricanes Go Down to Maryland in Three Games

Senior Frannie Savage led the Hurricanes with 10 kills, and contributed 7 digs total, while Jill Robinson led the match with 27 assists and dished out nine digs.

On defense, Cassie Loessberg led the team with 16 total digs.

As a team, the Hurricanes posted a .113 hitting percentage to the Terrapins’ .233. Miami out-dug Maryland 53 over 46. However, the Canes could not put a stop on Maryland’s attack, and were just five kills short of tying the Terrapins’ 43 total kills. Miami was also two blocks away from tying the Maryland’s 10.

Game one saw six tied scores, and three scoring drives at five points, before Maryland came away the win at 30-24. The Terrapins started out with an early 7-1 lead, until Savage came up with a kill to begin the Hurricanes’ rally back. By mid-point of the game, both teams battled for the lead tying one another five times. Miami tied at 15 all off of a bad set by the Terrapins. However, Maryland responded by going on a five-point run to take the lead 20-16, and never looked back. Maryland went on to take the lead, which led to the game win and a 1-0 lead.

Game two saw Miami jump to a 13-7 lead as the Hurricanes went on a five-point run throwing down four consecutive kills and a service ace. Maryland rallied back to tie the game 16-all after a bad set by Robinson. The Terrapins went on a four-point run of their own to take their first lead at 20-16 and eventually the 30-24 game win.

In the final game, Maryland landed on the board first, with Miami trialing no more than four points. The Hurricanes rallied to tie the score eight times. By 24-all UM could not capitalize on their offense as Maryland took the lead off of a Hurricane error and two back-to-back Maryland kills to put the score at 27-24. The Terrapins eventually went on win the game and the match at 30-27.

The Hurricanes will be back in action Sunday, October 29 as they take on the Eagles of Boston College.

The match can be seen live online via ACC Select, a new online video stream presented by the Atlantic Coast Conference in partnership with Raycom Sports and Lincoln Financial Sports. Fans can access ACC Select at www.accselect.com for complete details.