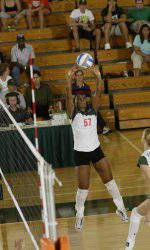 CORAL GABLES, Fla. (www.hurricanesports.com) – The University of Miami volleyball team snapped a three-match skid to take their first ACC win of the season with a 3-0 (30-24, 30-27, 30-14) sweep over visiting Atlantic Coast Conference foe Maryland, Sunday afternoon at the Knight Sports Complex.

In the last three matches, senior setter Jill Robinson has posted a double-double in assists and digs, totaling four so far for the season. Robinson led the match with 38 assists (8.96 per game) and 10 digs (2.38 per game).

Freshman libero Cassie Loessberg led the match defensively with 16 digs (2.33 per game), making this her third match in a row leading the Hurricanes in digs.

“The most impressive is that we had eleven blocks in three games, and we really took care of things in the net, while our defense was covering behind them”, commented Head Coach Nicole Lantagne Welch,

“It was a great team effort with us hitting thirty-three percent which is excellent. It was an attribute to us passing, Jill setting, and to all of our players delivering on the offensive end.”

In game one, Miami came out strong leading the Terrapins 13-8. Maryland rallied back going on an eight point streak, to bring their score ahead, 16-13. From there, both teams battled for the lead before the score was tied 23 all. Miami scored four more back-to-back points to take the lead. Maryland responded with a kill by freshman Katie Usher to bring the score up to 24-27. But with three back-to-back kills by the Hurricanes’ Mayhew (1) and Savage (2), Miami went on to take the win 30-24.

Game two, Maryland jumped out ahead posting six unanswered points, bringing the sore 13-7. Miami never gained the lead until a kill by Ciara Michel forced the Hurricanes to tie the score 27 all. Miami rallied back with another three kills by Savage to snap the second win 30-27.

“I was very impressed with the team play. A big change came in the match when we were down in game two and just stayed at it and stayed persistent. That gave us a lot of confidence”, Lantagne Welch stated.

Miami overpowered Maryland in game three going on a seven point scoring drive at 23-10, and never looked back. By the end, Miami advanced to a match-point score 29-13. An attack error by Maryland’s Beth Gillming sealed a 30-14 Hurricane win and the match victory.