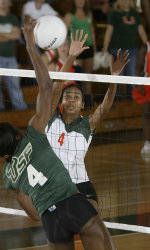 “This 100th win was very special for me. It was a big win for our program,” said Lantagne Welch who has been the only head coach in UM’s six-year history.

In her first collegiate game, freshman outside hitter Genny Mayhew led the Hurricanes (1-0) with a match high with 17 kills, while senior Francheska Savage added 16 kills with 12 digs.

“Genny Mayhew was awesome offensively for us, especially in her first collegiate match. Franny carried a big load as well” Lantagne Welch said. “We were really nervous in game one, but really settled down as a team in game two and picked our level of play, especially in the serving.”

“Most of all I was proud of our defense. I felt we forced them into many errors. We took away a lot of their bread and butter and had huge digs”

The match opened with Miami dropping the first game, 25-30 to Alabama (0-1). After a back and forth game, UM stretched the lead to three points at 16-13, but the Crimson Tide battled back, tying the game at 17-all. From there, Alabama stayed on top leading by as many as six points to win the first game 30 -25 behind Crystal Hudson’s eight kills.

Miami rebounded in the second game, taking an early lead before going on to win 30-20. Mayhew paced UM with six kills.

Led by Mayhew’s five kills, the Hurricanes carried the momentum of the second-game victory into the third frame, taking down the Crimson Tide 30-21 to take a 2-1 match lead.

Despite five kills by Savage, Alabama rallied in the fourth game to win 30-21, knotting the match score at two games apiece.

In the fifth and deciding game, the Hurricanes struck first, leading by as much as five points at 10-5 before Alabama fought back, tying the game at 14-all. The two teams traded points over the next four possessions until UM pulled ahead with the 17-15 victory, clinching the match.

Miami returns action tomorrow facing Kansas at 12 noon. and Alabama A&M at 5:30 p.m. on the final day of competition at the Academy Sports Invitational.