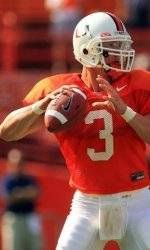 Miami – The Miami Hurricanes appeared for the first time under the new lights at the Orange Bowl Tuesday night, in the only team practice open to the public in the preseason. Hundreds of season ticket holders on-hand not only got a glimpse of the 2006 Hurricanes, but were able to pick where they could sit during the season as part of the Select-A-Seat promotion.

“It was nice to be in the OB,” head coach Larry Coker said. “The turf is awesome and it is a great place to play. I’m sure it will be rocking in a few weeks (against Florida State).”

The focus of the practice was on fundamentals, but the team did run 15 plays in an 11-on-11 scrimmage. UM’s defense held its offensive counterparts in check, with the exception of a long catch-and-run to the newest member of the receiving corps, freshman Ryan Hill. Hill, who entered camp as one of the nation’s top-rated high school cornerbacks, made the switch to offense two days ago.

Deemed a “playmaker” by Coker, the defense could afford to lose Hill for the time being because of the depth in the secondary. It also gives Hill a better chance to make an immediate impact.

“For a player it’s a position you can fit in pretty well,” Coker said. “Santana Moss and Reggie Wayne both started as freshman.”

Wednesday marks the first day of classes at UM, meaning that the football team has the day off from practice. The team returns to the Greentree Practice Fields at 3:20 p.m. on Thursday.