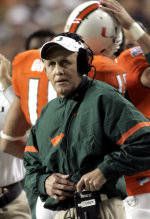 CORAL GABLES, Fla. – Continuing to schedule Division I-A football opponents, the University of Miami has signed contracts to play home-and-home series with Kansas State in 2011 and 2012 and with South Florida in 2012 and 2013.

“We are trying to schedule good football schools and top Division I-AA opponents,” said Miami head football coach Larry Coker, “and Kansas State and South Florida have very strong football programs. Our fans and our players are very interested in playing the best teams, and that’s our philosophy. We all feel that way — President (Donna) Shalala, our trustees, Paul Dee and myself. We will continue to play the best competition we can.”

Miami will play Kansas State at the Orange Bowl on September 24, 2011 and then will play at Snyder Family Stadium in Manhattan, Kan. On September 8, 2012. They will be the first games ever between the two schools.

The two-game series with South Florida will be on September 15, 2012 at the Orange Bowl and September 21, 2013 at Raymond James Stadium in Tampa. The Hurricanes and Bulls played for the first time last October 1 at the Orange Bowl, with Miami winning 27-7.

“Kansas State has had a lot of tradition, and it wasn’t too many years ago (1998) that they were only one win away from playing for the national championship,” said Miami head football coach Larry Coker. “They’ve done a great job. They’ve upgraded their facilities, and they’re a Big 12 school. It’ll be a tough matchup for us. And at USF, (head coach) Jim Leavitt has done a tremendous job. The Bulls are now a prominent school in the Big East, and they had that huge win over Louisville last year,” Coker added. “There will be a lot of competition, a lot of interest with in-state fans. There will be a lot of players that both schools recruited, so they will know one another.”

Miami athletic director Paul Dee said, “Having scheduled just one game with the University of South Florida, we’re pleased to announce that we will expand that series by two games, one in Miami and one in Tampa. The University of South Florida is a tremendously successful new program in college football, having just started Division I-A football in the last decade, and in that time they have had outstanding success. So we’re playing not only USF, but a Big East Conference school.”

“The University of Miami is always interested in playing top quality opponents from the major conferences, as well as inter-regional games,” Dee added. “In the next several years, we’ll play several members of the Big 12 Conference, with Kansas State joining Oklahoma and Texas A&M on Miami’s schedule. These are great contests, and we look forward to playing the Wildcats and beginning a great relationship with a new school on our schedule.