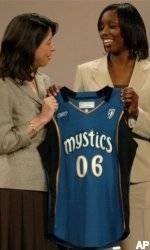 BOSTON, Mass. – Miami senior forward Tamara James was taken by the Washington Mystics in the first round as the eighth overall pick in Wednesday’s 2006 WNBA Draft held at the Boston Convention and Exhibition Center.

James becomes the first UM player in the WNBA’s 10-year history to be selected in the first round. She is just the second player in school history to be taken in the WNBA Draft, joining former Hurricane Octavia Blue who was a second round (15th overall) pick by the Los Angeles Sparks in 1998.

“I so excited,” said James. “I can’t wait to get to Washington and start playing. I couldn’t be happier right now.”

A 2005 and 2006 First Team All-ACC selection, she averaged a league-leading 21.5 points per game throughout her senior campaign and was the only player in the ACC to score in double figures every game played this season.

She joins a Washington team that finished fifth in the WNBA Eastern Conference standings last season with an overall record of 16-18 under the direction of first-year head coach Richie Adubato.

Projected as a guard/wing at the next level, James adds to the Mystics’ backcourt that includes WNBA All-Star Alana Beard along with the newly acquired Nikki Teasly who is regarded as one of the best point guards in the league.

The Mystics’ 2005 First Round pick, Temeka Johnson, was named the 2005 WNBA Rookie of the Year.

One of the league’s most popular team, Washington has led the league in attendance in six of franchise’s eight year’s in existence.

The Mystics held the eighth pick as a result of an off-season trade with Los Angeles that sent Johnson and Murriel Page to the Sparks in exchange for Teasly.

Along with James, Washington also selected UCLA guard Nikki Blue in the second round (19th overall) and Oklahoma City College center Miriam Sy in the third round (33rd overall).