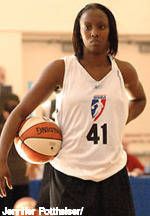 BOSTON, Mass. – University of Miami senior forward Tamara James is making preparations for Wednesday’s 2006 WNBA Draft which will air live on ESPN2 at 1 p.m. from the Boston Convention and Exhibition Center.

A native of Dania, Fla., James is projected by many experts to be selected in the first round of Wednesday’s draft.

A 2006 First Team All-ACC selection, she averaged a league-leading 21.5 points per game throughout her senior campaign and was the only player in the ACC to score in double figures every game played this season.

On Monday, she participated in the WNBA’s Pre-Draft camp which offered team officials the opportunity to evaluate draft-eligible players first-hand.

Should James be taken in Wednesday’s draft, she would be just the second player in UM history to do so, joining former Hurricane Octavia Blue who was selected by the Los Angeles Sparks in the second round (15th overall) of the 1998 WNBA Draft.

Live coverage of Wednesday’s first round is scheduled to begin at 1 p.m. on ESPN2 with continued coverage of the second and third rounds on ESPNU and NBA TV.