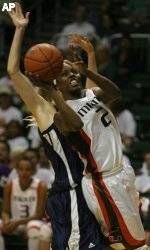 The WBCA (Women’s Basketball Coaches Association) and Eastman Kodak Company have partnered for each of the past 32 seasons, selecting each of the eight WBCA geographical regions in Division I women’s basketball.

James will head to Boston, Mass. Monday to participate in the 2006 WNBA Pre-Draft Camp at Emmanuel College in advance of the 2006 WNBA Draft, which will take place Wednesday in Boston at 1 p.m. on ESPN2.

James is one of 42 of the world’s top college seniors invited to attend the Pre-Draft Camp which offers team officials the opportunity to evaluate the skills of the top, draft-eligible players for this year’s upcoming draft.