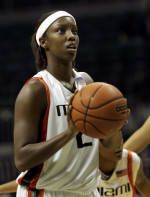 James – one of 48 finalists who are voted upon by WBCA member coaches in each of the eight WBCA geographical regions – is now in the running for selection to the 10-member Kodak/WBCA All-America Team.

A First Team All-ACC selection, James led the ACC in scoring for the second-consecutive season averaging 20.9 points per game throughout the regular season.

After earning a first-round bye at the 2006 WNIT, James the Hurricanes will take on the winner Thursday’s Florida International- Cincinnati game Saturday at 7 p.m. at the BankUnitedCenter.