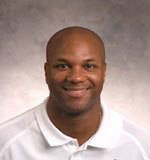 Mosely, 30, was the wide receivers coach at Northern Illinois for the last two seasons. Last year, he was the position coach for Sam Hurd, who caught 65 passes for 1,074 yards and 13 touchdowns. In 2004, he coached Dan Sheldon, who led the major-college ranks in yards-per-reception average (23.4).

Previously, Mosley worked for new UM quarterbacks coach Todd Berry at Army in 2002 and 2003 as the wide receivers coach and head junior-varsity coach. At West Point, Mosely worked with Aris Comeaux, who was a finalist for the Mosi Tatupu Special Teams Player of the Year Award, and William White, who finished No. 17 in NCAA Division 1-A all-purpose yardage (149.6 ypg. average) in 2002. During the summer of 2003, Mosely participated in the NFL Minority Fellowship Program with the Tennessee Titans.

” We are very excited to complete our coaching staff with the addition of Marquis Mosely, ” said Coker. ” Marquis is an outstanding person, and he ‘ ll be an outstanding football coach. We ‘ re excited about him being a part of our staff. ”

Joe Novak, the head football coach at Northern Illinois, said of Mosely, ” Marquis is a good, young coach with a great future. I ‘ m sure he will do a wonderful job at Miami. Not to brag, but our wide receiving corps blocked pretty well and that ‘ s key in our running game. Marquis motivated our kids to do something they didn ‘ t want to do. Blocking is dirty work. Marquis got them to excel at blocking and that ‘ s good coaching. ”

Mosely said, ” This is a great opportunity for me to come to a great program like Miami so early in my career. I can grow as a coach and learn from the expertise of the other coaches on the staff. The athletes here are phenomenal. I am really looking forward to the relationships I ‘ m going to build with the wide receivers.

A native of Bloomington, Ill., Mosely lettered for three seasons at the University of Illinois under Lou Tepper (1993, 1994 and 1996). In 1996, Mosely was an 11-game starter. In 1997, Mosely transferred to Illinois State and played for Berry. He was a first-team All-Gateway Conference selection as a senior when he caught 61 passes for 875 yards and four touchdowns, plus he set three school records (single-game receptions with 12 vs. Northern Iowa, single-game all-purpose yardage with 316 vs. Northern Iowa, and longest kickoff return with a 100-yarder against the University at Buffalo).

He graduated with degree in speech communications from Illinois in 1998. He entered the hotel and aviation industries and served as a commercial pilot for two years before joining Berry ‘ s staff at Army. A three-sport star from Bloomington (Ill.) High School, Mosely was All-Conference, All-Area, consensus All-State, and a Parade magazine All-America receiver as a prep senior in 1993. As an upperclassman (1992-93), Mosely caught 95 passes for 2,043 yards (21.5-yards per catch) and 27 touchdowns. During his final campaign, he made 56 receptions for 1,271 yards and 15 TDs. As a junior, his team finished 13-2 and reached the Class 5A state playoff semifinals. In track, Mosely was a member on the mile relay unit that placed fifth (1991) and sixth (1992) at the state meet. He is single.