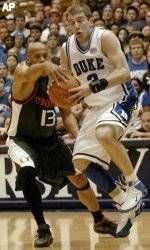 The senior sharpshooter scored 30 points to set the program’s career scoring mark and help the second-ranked Blue Devils beat Miami 92-71 on Sunday, a win that could vault them back to the No. 1 ranking.

Redick finished 10-for-15 from the field and hit six 3-pointers for the Blue Devils (25-1, 13-0 Atlantic Coast Conference), passing assistant coach Johnny Dawkins by one point on the all-time list with 2,557 points. That also moved Redick into second place in the ACC career lists, 30 points behind Wake Forest’s Dickie Hemric.

Shelden Williams added 17 points and 15 rebounds for Duke, which could move up in the rankings after top-ranked Connecticut’s loss to Villanova earlier in the week. The Blue Devils were ranked No. 1 through the first 11 polls before falling to No. 2 after an 87-84 loss at Georgetown on Jan. 21.

The Blue Devils have won eight straight since, jumping to a big lead late in the first half against the Hurricanes (14-12, 6-7) and maintaining a double-digit lead the rest of the way.

Redick was the center of attention on this day, with the fans crowded into Cameron Indoor Stadium practically yelling for him to shoot every time he touched the ball. Redick did plenty of that in the first half, scoring 22 points on 7-for-9 shooting with four 3-pointers to help the Blue Devils to a 59-43 lead at the break.

Things slowed down for him in the second half, with Miami’s defense paying special attention to Redick every time he ran the baseline or tried to weave through perimeter screens. Redick missed a 3 in transition that would have set the mark with about 6 minutes left, but he finally made history a few plays later.

He lost a defender around a screen from Lee Melchionni, took a pass in front of the Duke bench and launched a 3 that had the entire crowd holding its breath.

The ball swished through for Redick’s 30th point and an 87-67 lead with 4:11 left, setting off an earsplitting roar from the fans. As Redick ran back downcourt, Dawkins stood up and applauded briefly on the Duke sideline and received several pats on the shoulder from those sitting behind the bench.

Redick left the game with 1:58 left and Duke leading by 20, getting a handshake from coach Mike Krzyzewski as he walked to the bench. Redick then went right to Dawkins and hugged him before receiving congratulations from his teammates.

Miami got no closer than 10 points after the break.