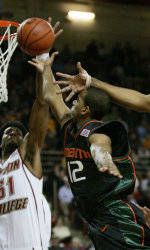 BOSTON (AP) – Jared Dudley scored 16 points and No. 13 Boston College relied on some uncharacteristic 3-point shooting to beat Miami 65-54 on Thursday night for its 10th win in 11 games.

The Eagles (21-5, 8-4 Atlantic Coast Conference) usually rely on the inside scoring of Craig Smith and Dudley, but they broke the game open by hitting five 3-pointers, including three straight, in a 27-4 run over a 10:13 stretch of the second half.

Smith, who was slowed by Miami’s tight zone defense in the first half, finished with 15 points and nine rebounds, while Sean Marshall added 10 points. It was BC’s ninth straight win over Miami, also a former Big East school.

The Hurricanes, who led by six points at halftime, took a 31-22 lead on Hite’s two free throws 1:10 into the second half. BC then seemed to get untracked when Smith had a three-point play and Marshall hit a 3 from the left wing, only the Eagles’ second shot from the perimeter the entire game, to cut it to 31-28.

After Anthony King’s free throw tied it, Louis Hinnant hit two 3s and Marshall added another in a 2:10 span, pushing the Eagles ahead 43-34 with just under 10 minutes left.

The Eagles’ sharp shooting continued when Tyrese Rice and Smith had baskets before Rice and Dudley hit 3-pointers 64 seconds apart, making it 53-37 with 6:48 left.

BC hit 12 of its first 19 shots – half of them 3-pointers – to start the second half after its lowest scoring half of the season.

The Eagles had trouble with Miami’s 2-3 zone in the first half as the Hurricanes packed their defense around Smith. BC hit just one shot from outside a couple of feet and finished 6-for-20 in the half.

Smith’s short jumper in the key tied it at 17-all with 6:52 left in the half before the Hurricanes closed with an 11-5 run. Guillermo Diaz hit a jumper in the final second to give Miami a 28-22 lead.