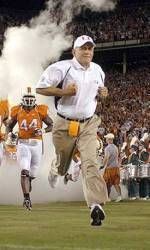 CORAL GABLES, Fla. – The Atlantic Coast Conference released the 2006 football schedule for its 12 member schools today. The 2006 Hurricanes will face one of the toughest schedules in the nation in their third season in the ACC, including games against seven teams that played in bowl games following the 2005 season. The Hurricanes will play seven home games at the Orange Bowl, and four of them will be against bowl teams. (All dates are subject to change, and game times have yet to be announced.)

The Hurricanes, annually one of college football’s top television ratings draws, have two games already scheduled in for national telecasts and both of them are on national holidays. The Hurricanes once again open the season with a nationally televised game on Labor Day night against arch-rival Florida State on ESPN. UM will also play on Thanksgiving night, hosting the Boston College Eagles at the Orange Bowl in another ESPN nationally televised game.

“This schedule will be a tremendous challenge for our football team,” said Hurricanes head coach Larry Coker. “But it’s a great home schedule for our fans, with marquee teams such as Florida State and Virginia Tech coming to the Orange Bowl. Those are the teams our fans want to see. But what I like is that early in the season we have a difficult schedule, and that has not been the case the last few years. That allows the fans to get involved early, and it’s a great motivating factor for our team.”

Miami will open the 2006 season with two home games and will be at home for five of the first six games (with an open week as well). The Hurricanes will then play four of their final six games on the road.

Miami begins the 2006 schedule under the Orange Bowl lights against Florida State in the third consecutive Monday night national telecast on September 4. The Hurricanes and Seminoles will meet for the 51st time in another edition of one of the nation’s top football rivalries. This year’s game will be televised on ESPN, which now has the broadcast rights to the NFL’s “Monday Night Football,” which begins one week after the Miami-FSU game. Last season, Florida State nipped Miami 10-7 in Tallahassee, snapping a six-game UM winning streak in the series, so revenge will be in the minds of the Hurricanes. In the all-time series, Miami holds a 29-21 lead, including a mark of 15-14 at the Orange Bowl. The Seminoles were 8-5 in 2005 but won the ACC and played in the Orange Bowl Classic.

The Hurricanes will host Florida A&M on Saturday, September 9, getting only five days in between games. The Hurricanes and Rattlers have played six times, with Miami winning the last five times. UM has outscored FAMU 269-39 in the series. The two teams last met in 2002, a 63-17 victory for Miami. Last season, the Rattlers finished 6-5 in their first season under head coach Rubin Carter, who was an All-American defensive tackle at Miami in 1974. Florida A&M is the only Division I-AA team on the UM schedule in 2006.

Miami will play its first road game of the season when it travels to Louisville on Saturday, September 16. In 2004, the two teams played one of the most exciting games of the season, with Miami coming out ahead 41-38 at the Orange Bowl. Louisville was 9-3 in 2005 and lost to Virginia Tech in the Gator Bowl. Under head coach Bobby Petrino, the Cardinals have one of the most explosive offenses in college football, led by quarterback Brian Brohm and running back Michael Bush, who led the NCAA in scoring (24 touchdowns in 10 games in 2005). Miami has never lost to the Cardinals, holding a 9-0-1 lead in the series. This is the Hurricanes’ first game in Louisville since 1984.

The Hurricanes will not play on Saturday, September 23, their only off week of the season. On Saturday, September 30, Miami will host the University of Houston at the Orange Bowl, beginning a streak of eight consecutive Saturday games. This will be the 18th game in the series, with Miami holding a 10-7 lead. Miami and Houston last played in 2004, a 38-13 UM road victory. The last game between the two teams in the Orange Bowl was in 1991, a 40-10 UM win. Houston is a vastly improved team, going 6-5 last year and advancing to the Fort Worth Bowl before losing to Kansas. Senior quarterback Kevin Kolb is the school’s career total offense leader and has started 36 consecutive games since he was a freshman.

The North Carolina Tar Heels will come to the Orange Bowl for the second consecutive season on Saturday, October 7. This will be only the second ACC game for the Hurricanes in the first seven weeks of the season. In two years in the ACC, Miami and UNC have played twice, with each team winning at home, including a 34-16 Miami win last season. North Carolina finished 5-6 in 2005. North Carolina is one of only two ACC schools with a winning record vs. Miami, holding a 5-4 edge in nine games played in the series, so the Hurricanes can even the series with a win.

Miami will play Florida International University for the first time ever on Saturday, October 14 at the Orange Bowl. It will be a road game for the Golden Panthers, although they will have to travel only 12 miles for the contest. FIU is coached by former Miami Dolphins quarterback Don Strock and won its final three games of the season to finish with a 5-6 record. FIU commenced its football program in 2002 and has an all-time record of 15-29. For FIU, this will be only their fifth game ever against a team from a BCS conference, with Miami joining Kansas State and Texas Tech (both in 2005) and South Florida and Maryland (in 2006). With FSU, FAMU and FIU on the schedule, Miami will play three state schools for the first time since 2002 and only the second time since 1980.

The final six games of the season are against conference rivals. The Hurricanes will go back on the road on Saturday, October 21, when they make their first visit to Duke since 1983, when the Hurricanes won 56-17 on the way to their first national championship. This will be only the fourth game ever between the two schools. Duke won the initial meeting 20-7 in 1976, and Miami won 52-7 last season at the Orange Bowl, giving them a 2-1 lead in the series.

On Saturday, October 28, the Hurricanes will try to make amends for one of their three 2005 losses when they travel to Atlanta to face Georgia Tech. Last season, the Yellow Jackets upset Miami 14-10 in the next-to-last game of the season to thwart UM’s chances of advancing to the ACC Championship Game. Georgia Tech is one of only two ACC schools that hold a series lead over Miami (7-4, including 6-2 at home). Georgia Tech is coming off a successful 2005 season (7-5, 5-3 in the ACC) that was capped by an appearance in the Emerald Bowl against Utah.

Arch-rival Virginia Tech comes to town on Saturday, November 4, and chances are high that first place in the ACC Coastal Division will be riding on the outcome. The two perennial national powers have played 23 times, with Miami holding a 16-7 lead in the series. However, the Hokies won the last time they played in the Orange Bowl, a 16-10 decision that gave Virginia Tech the 2004 ACC title and dashed the Hurricanes’ hopes of playing in a fifth straight BCS bowl game. Virginia Tech was 11-2 last season (7-1 in the ACC) and ranked seventh the final polls of both AP and USA Today (Coaches). The Hokies defeated Louisville in the Gator Bowl.

On Saturday, November 11, Miami will play at Maryland, the only ACC school the Hurricanes did not play in 2004 or 2005. Miami and the Terrapins have played 14 times, with each school having seven wins. They have not played since 1987, when Miami won 46-16 at home. However, this will be only Miami’s third visit to College Park, Md. (each team has one win at Maryland). In 2005, the Terrapins finished 5-6 for the second straight year after three straight seasons with 10 or 11 wins (they were 3-5 in the ACC).

Miami will make its final road trip of the season to Charlottesville to face Virginia on Saturday, November 18. The two schools have played only three times, all Hurricanes victories, including a 25-17 win at home last year and a 31-21 win in Charlottesville in 2004. Virginia finished 2005 with a record of 7-5 (3-5 in the ACC) and beat Minnesota in the Gaylord Hotels Music City Bowl.

Miami will close out the regular season on Thursday, November 23 by hosting Boston College at the Orange Bowl. This will be the first meeting of the two schools as members of the ACC, but they are hardly strangers. Miami and Boston College were members of the Big East for more than a decade and have been playing for more than half a century. Miami has won 22 of the 25 meetings, including all 16 at the Orange Bowl. This will be Miami’s first game on Thanksgiving since the Hurricanes played East Carolina in 1986.

With Maryland and Boston College on the schedule this season, Miami will have faced all 11 ACC schools in their first three seasons in the conference. Miami finished the 2005 season with a record of 9-3. The Hurricanes were 6-2 and in second place in the Coastal Division. The ACC Conference Championship Game will be played on December 2 at ALLTEL Stadium in Jacksonville in a nationally televised game on ABC. With 12 games on the regular-season schedule, if the Hurricanes were to play in the ACC Championship Game and a bowl game, they would play 14 games for the first time in school history.

Season tickets can be purchased by calling 305-284-CANE in Miami-Dade County or 1-800-GO-CANES elsewhere. Renewals for season ticket holders will be mailed in the next few weeks.

Home games in CAPS. ACC games designated by *. Dates are tentative and subject to change. Game times are not yet available.