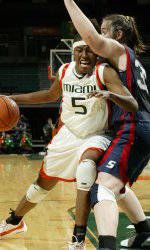 A Quick Look at Boston College After dropping their last three games, the 21st-ranked Eagles are 12-5 on the year and 0-3 in ACC play. The Eagles have stifled opponents, allowing just 54.4 points per game this season and rank eighth in the NCAA in rebounding margin (+10.1).

The Series In a match-up of former BIG EAST rivals, Miami, who joined the ACC last season, and 2005-06 ACC newcomer Boston College will meet for the 24th time Thursday night. Miami holds a 15-8 edge in the all-time series with the Eagles.

In the last meeting, Boston College knocked off UM 65-53 in the first round of the 2004 BIG EAST Tournament in Hartford, Conn.

Boston College’s last trip to Coral Gables was memorable one as the Eagles became the first team to play in the BankUnited Center – formerly the Convocation Center – in a 79-61 win over the Hurricanes in the building’s opening night Jan. 15, 2003.

Game Promotions Miami Hurricane women’s basketball fans will have the opportunity to collect player trading cards during all home games. The first 200 fans in attendance at each game will receive the cards, which will feature a different player each game during the 2005-06 including Thursday with junior center Imani Dhahabu.Tickets Tickets are just $5 dollars for adults and $3 dollars for children and senior citizens. To purchase tickets or for more information please call the Hurricane Ticket Office at 1-800-GO-CANES or PURCHASE ONLINE at hurricanesports.com.