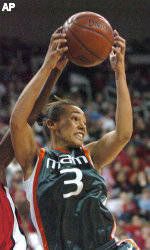 ATLANTA (AP) – Georgia relied on its backcourt for most of its scoring Sunday as the 13th-ranked Lady Bulldogs took a break from their Southeastern Conference schedule to beat Miami 74-59.

Cori Chambers hit five 3-pointers and had 17 points and backcourtmate Sherill Baker added 15 points for Georgia (12-4). Foul trouble and the defense of Tamara James kept Georgia forward Tasha Humphrey to 11 points, about half of her 20.4 average.

Georgia led by at least 20 points for much of the second half but Miami pulled within 68-57 on a 3-pointer by James with 2:03 left, but couldn’t get any closer.

James had 26 points for Miami (12-4), which plays in the Atlantic Coast Conference.

Georgia led 40-30 at halftime despite Humphrey playing only 4 minutes. Humphrey picked up two early fouls, the second an offensive, and left the game at the 16:19 mark.

Without Humphrey, Georgia relied on three 3-pointers from Chambers in the half.

Humphrey stayed in the game after picking up her third foul less than 2 minutes into the second half, but she left with four fouls at the 12:28 mark.

Georgia led 45-30 before Miami scored its first points of the second half on two free throws by James.

Miami went almost 7 minutes into the second half before its first field goal, also by James.

Georgia, which lost four inside players before the season began, had a major scare when starting forward Megan Darrah injured her shoulder early in the second half when Miami’s 6-foot-3 center Brittany Denson fell on her.