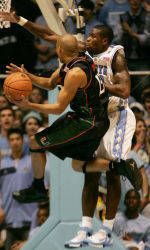 CHAPEL HILL, N.C. (AP) – Earlier this season, Miami appeared to be drifting toward the kind of year that would have fans counting down the months to football season.

Two straight wins against ranked opponents might change that.

Guillermo Diaz scored 24 points – including a clutch 3-pointer late – to help Miami upset No. 20 North Carolina 81-70 on Saturday, giving the Hurricanes their first win in six tries in Chapel Hill.

Of course, just beating the storied Tar Heels on the road – even if the team looks nothing like the one that won the national championship last year – was reason enough to celebrate.

“We’ve never had the experience of coming over here to a well-known team like North Carolina and beating them,” Diaz said. “It’s a big lift for us. But we have to continue and don’t think, ‘It’s a good win and now we’re going stop.’ We need to go forward.”

The wins certainly come at a good time for the Hurricanes, who have gotten off to a surprising start in their second ACC season after a tough stretch to open the year.

Miami started 4-3 while playing without guard Anthony Harris, who was sidelined with a broken right foot. But the Hurricanes have won six of nine since Harris returned, losing only to No. 2 Florida, No. 10 Louisville and No. 18 North Carolina State.

The 6-foot-2 junior certainly showed his value against the Tar Heels, scoring 17 points and draining the go-ahead 3-pointer during a 12-0 spurt in the final 4 1/2 minutes.

Now Miami must maintain that momentum heading into home games with Clemson and No. 15 Boston College next week.

“We kept stressing to our kids to understand where we’re at,” said Miami coach Frank Haith, who grew up in nearby Burlington and had about 20 family members in attendance. “We didn’t win some of those games against good teams, but we knew we could play better.

“We knew there were still a lot of games to play, and I applaud them for staying focused. And we needed a good win to give them that confidence. Those guys were able to handle what they didn’t do earlier this season and learn from it.”

It certainly was a setback for the young Tar Heels in their trial-by-fire introduction to the ACC. They got beat on the boards, committed too many turnovers and struggled offensively in a performance that had coach Roy Williams – as has been the case several times this season – pacing the sideline or burying his head in his hands in frustration.

Miami shot just 38 percent, but took a 43-34 rebounding advantage against a North Carolina team that had outrebounded opponents by an ACC-best 9.5 per game. That included a 21-11 edge on the offensive glass, which led to plenty of second shots – including one possession in which Miami came away empty after five shots.

“It was a total breakdown of what we like to think we practice every day,” Williams said. “Very, very disappointing afternoon.”

Trailing 62-59, Hite hit three free throws to tie it with 4:31 left after he was fouled on a 3-pointer by Danny Green. That started the 12-0 spurt, with Miami going ahead to stay when Diaz found Harris for the 3 on the next possession and a 65-62 lead with 3:46 left.

“That was a heartbreaker,” Hite said of the shot. “They all dropped their heads when the shot went down. We knew the game was over at that point.”

North Carolina had won its first two ACC games with solid play down the stretch, scoring the final 13 points in an 82-69 win against N.C. State and making the key plays in the final minute to hold off Virginia Tech 64-61.

This time, it was the experienced Hurricanes – who started three juniors and two seniors – taking control late against a Tar Heel team that starts three freshmen.

The Hurricanes played plenty of zone defense to collapse on 6-9 Tyler Hansbrough, sending a stream of double-teams at the rookie and forcing others to step up. Hansbrough finished with a career-high 25 points, but managed only one field goal in the final 13 1/2 minutes and went several stretches without touching the ball.

Reyshawn Terry was the only other Tar Heel to finish in double figures with 18 points; the rest of the team shot 10-for-32. North Carolina had 17 turnovers.