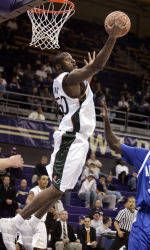 SUNRISE, Fla. (AP) – Juan Palacios scored 19 points to lead No. 10 Louisville to a 58-43 victory over Miami in the Orange Bowl Classic on Saturday.

Taquan Dean had 13 points and David Padgett added 11 points and 13 rebounds for the Cardinals (11-1). Dean and Padgett each played after picking up a fourth personal foul midway through the second half.

Guillermo Diaz, the Hurricanes’ leading scorer, was held scoreless for the second time in his career. The junior was 0-of-10 from the field, including four 3-point attempts, and was 0-of-1 from the free throw line.

Louisville trailed 39-38 before Terrence Williams made two free throws and a corner jumper to give the Cardinals a three-point lead. Palacios then hit consecutive 3-pointers to give Louisville a 48-39 lead with 3:39 left.

Following a timeout, the Cardinals scored the next seven points to make it a 17-0 run. Hite’s two free throws with 1:23 left ended the spurt.

Louisville failed to score during the first 6:53 of the second half, while Miami scored nine points to pull within 34-33. Trailing 38-33, Miami scored six straight points to take their first lead of the game.

Hite’s slam finished a fast break and gave the Hurricanes a 39-38 lead with 7:27 left. Louisville had one field goal in the opening 14:38 of the second half.

Louisville hit four 3-pointers – the first two by Palacios – while building a 16-5 lead 5:01 into the game. Miami failed to get within six the rest of the half as the Cardinals took a 34-24 lead.