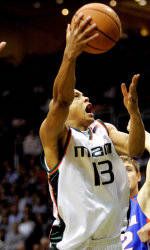 CORAL GABLES, Fla. (AP) – Joakim Noah had 18 points and six blocked shots and No. 5 Florida beat Miami 77-67 on Thursday night to improve to 11-0 and set a school record for consecutive wins to open a season.

Lee Humphrey added 15 points and Corey Brewer had 11 for the Gators, who have scored at least 74 points in every game this season.

Guillermo Diaz had a season-high 25 points for Miami (6-5), which was held scoreless over the final 2:11.

Noah then scored five straight points to tie the game and spark a 12-3 run that gave Florida a 71-67 lead with 1:23 remaining.

The final three points of the half came with just 0.9 seconds remaining, when Brewer made three free throws after being fouled by Miami guard Anthony Harris while attempting a 3-pointer.

Brewer scored 10 points in the first half, but was just 2-of-11 from the field. Diaz scored 11 points in the opening 20 minutes on 3-of-8 shooting.

Playing on Miami’s campus for the first time since 1990, Florida struggled with its shooting. The Gators entered the game shooting an NCAA-best 54.4 percent from the field, but finished at just 38.6 percent Thursday, including 32.3 percent in the first half.

The loss was the first at home this season for Miami.