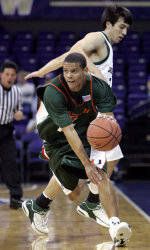 SEATTLE (AP) – Robert Hite returned from crumpling to the floor with an injured left leg midway through the first half to score all 17 of his points over the final 21:45 as Miami ran away from Wisconsin-Green Bay 80-54 Tuesday night in the third-place game of the season-opening Black Coaches Association Classic.

Guillermo Diaz, selected for the preseason all-Atlantic Coast Conference team, also had 17 points for the Hurricanes on 3-for-5 shooting from three-point range.

Miami (2-1) expected to play in the championship game late Tuesday against host Washington. But Air Force upset the Hurricanes, 57-53, in the semifinals late Monday night.

Reserve Aswan Minatee led Wisconsin-Green Bay with 16 points. The Phoenix (1-2) return home after getting routed on consecutive nights of the tournament. In the other semifinal Monday, Washington raced past them 87-54.

They never trailed, jumping to a 14-3 lead 7:29 into the game. The remainder of the half saw Miami three-pointers repel the Phoenix closing to within five, six and then eight points. Hite, an honorable mention all-ACC guard last season, turned Wisconsin-Green Bay back twice from long range in the final 1:45 of the opening period. That gave Miami a 34-23 halftime lead.

The Hurricanes then began the second half using a half-court, zone-trap defense for the first time. That took the Phoenix out of their deliberate offensive sets and created Hurricanes fast breaks the other way.

The result was Miami rolling to a 51-26 five minutes into the second half. Hite scored seven straight points during the span.

Only two of the first 10 games in this three-day tournament were decided by fewer than 10 points. The average margin of victory entering the championship game was 18.5, with Washington heavily favored to increase that figure over Air Force.