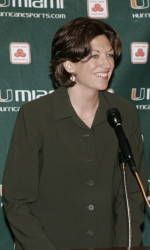 Gibbs comes to Miami from Charlotte where he spent the past two seasons serving as an assistant coach under Meier. Bell, whose father, Roger, is the Associate Athletic Director for Life Skills at UM, served as an assistant coach at Murray State over the last two seasons. Hembree enters the college ranks after a very impressive 21-year tenure as a high school head coach.

“With the help of the University of Miami, I think we were able to attract what we feel is one of the most dynamic coaching staffs in the country,” Meier said. “Darrick, Tombi and Angie each bring unique strengths not only to this program, but also to the university, and as a staff we are excited about the possibilities of what we can accomplish.”

A native of Pawley’s Island, S.C., Gibbs’ coaching career began at Wofford, where, in addition to earning a B.S. in psychology in 2000, he served as a student-assistant from 1998-01.

“Darrick is someone who has come through the system, someone who has worked hard to get where he is,” said Meier of Gibbs. “He is the kind of person who is going to come in, roll up his sleeves and go to work to do everything he can to make this program better. I believe he is one of the hardest workers and has a tremendous passion to succeed.”

Bell heads to Miami following a two-year stay from 2003-05 as an assistant coach under Joi Felton at Murray State.

Bell was a standout guard at the University of Florida from 1997-01, where she earned All-SEC Second Team honors in 2001. She left Florida ranked third all-time in career assists (431), sixth in free throws made (274) and seventh in career steals (191) and was drafted by the Minnesota Lynx of the WNBA in 2001.

She earned a B.S. in exercise and sports sciences with a specialization in sport management in 2001. Born in the U.S. Virgin Islands, Bell was raised in Miami. Her older brother, Raja, plays for the Utah Jazz of the NBA.

“Tombi has not only achieved an enormous amount of everywhere she has been, but she has also done it with a tremendous amount of class,” said Meier of Bell. “Anytime you can bring in someone such as Tombi, with what she has to offer, it is going to be a major asset for your players and your program.”

Hembree joins Meier’s staff following a 21-year career as one of the most successful high school coaches in the country. She spent the past seven seasons as the head coach at Collins Hill High School in Suwannee, Ga. where she led the Lady Eagles to three state championships and three regional championships with an overall record of 181-33 (.846), including an impressive 63-2 mark over the last two seasons.

In addition to winning the Georgia State Championship in 2005, Hembree’s Collins High team finished the 2004-05 season ranked No. 5 nationally and first in the south region by USA Today. She was also named the Atlanta Tip-Off Club’s Coach of the Year in 2005.

“When we were looking for someone who had the same philosophy and mindset with what we are going to accomplish – a passion for defense and a drive to out-work opponents – it took about five seconds to figure out we wanted someone like Angie,” said Meier of Hembree. “She is one of the most successful coaches in the south and in the nation and we were very fortunate to have attracted her to Miami.”

Meier and staff will return 10 letterwinners in 2005, including honorable mention All-America and First Team All-ACC selection Tamara James, who finished the 2004-05 season ranked fourth in the NCAA in scoring with 22.3 points per game.