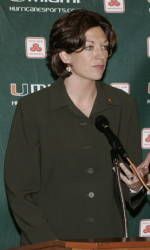 “We are extremely excited to have found one of the top coaches in the country in Katie Meier,” said Dee. “With what she has been able to accomplish at Charlotte, along with her background and ties within the Atlantic Coast Conference, Katie not only has the potential to make this program one of the best in the ACC but also one of the top programs in the country.”

Meier, who succeeds former head coach Ferne Labati, becomes just the seventh head women’s basketball coach at UM and inherits a program that returns all but two players from a team that finished the 2004-05 season with an overall record of 13-16 and a 4-10 mark in ACC play.

“I feel that this is the perfect fit for me,” said Meier. “With the strong emphasis on academics, along with the already strong background in athletics, the University of Miami has all the potential to become one of the nation’s elite programs.”

“One of the things that has made a big impression on me is the role that leadership plays here at Miami. From President Shalala down through Mr. Dee, there is a strong feeling of leadership and I believe that is what will make this a success.”

Meier could solely be responsible for bringing the 49er women’s basketball program into national prominence.

Prior to her appointment as head coach at Charlotte in 2001, the 49ers had only one previous postseason appearance – a WNIT berth in 1990.

In her inaugural campaign at Charlotte, Meier led the 49ers to a 16-13 finish to record their first winning season in eight years.

In 2003-04 Meier and the 49ers concluded the season with a 17-14 record while earning a trip to the 2004 WNIT. Along with marking the first time in school history that the 49ers had made back-to-back postseason appearances, Meier also led Charlotte to their first-ever postseason victory with a 78-71 win over Clemson in the first round of WNIT.

Last season, she enjoyed an overall record of 22-9 to tie for the third-most single season wins in Charlotte history and the most wins for the program in a single season since 1990-91. The 49ers also advanced to the postseason for the third-consecutive season and the WNIT for the second-straight year.

Prior to Charlotte, Meier spent seven seasons at Tulane University, serving as an associate head coach from 1999-01 and an assistant coach on the Green Wave staff from 1994-99. As a member of the Tulane coaching staff, Meier helped the Green Wave to an overall record of 164-52 (.759) in seven seasons, including the highest ranking in school history (13th by the Associated Press) in 2000 and a school-record 27 wins the same season

During her time at Tulane, Meier and the Green Wave also saw an impressive seven-year run at the NCAA Tournament.

Meier began her collegiate coaching career at the University of North Carolina at Asheville where she served as an assistant coach during the 1993-94 season.

Meier’s success as a coach is a direct reflection on her playing career as a stand-out at Duke University. A four-year letterwinner for the Blue Devils under head coach Debbie Leonard from 1986-90, Meier’s name is scattered throughout the Duke record books.

Meier wasted no time making her mark at Duke, earning ACC Rookie of the Year and Basketball Yearbook Freshman All-America honors 1986. Meier injured her knee during her in 1988 during her junior season and ultimately missed the entire 1989 campaign while recovering.

Meier returned to Duke for her senior season in 1990 without missing a beat, earning Kodak/WBCA District 2 All-America and All-ACC First Team accolades while being named the Blue Devils’ most valuable player.

In 2002 Meier was honored by Duke for her efforts as a player when she was named to the inaugural induction class in the Blue Devils’ Hall of Honor. That same year Meier was named to the Atlantic Coast Conference’s 50th Anniversary Team.

Following her playing career at Duke, Meier moved overseas to play three seasons with BBC Mini-Flat Waregem in Belgium from 1990-93. There, she helped lead her team to three First Division regular season titles and one Belgian Cup Championship.

While in Belgium Meier also spent time teaching classes of conversational English while coaching teams of 15- to 17-year-olds.

A native of Wheaton, Ill., Meier graduated from Wheaton High School in 1985 prior to going to Duke.