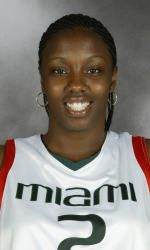 CORAL GABLES, Fla. – The University of Miami women’s basketball team’s Tamara James has been named an Honorable Mention All-American as voted on by the Associated Press.

James, a junior forward from Dania, Florida, concluded the 2004-05 regular season ranked second in the NCAA and first in the ACC in scoring, averaging 22.9 points per game and led the Hurricanes with 6.9 rebounds per game on her way to being named a All-ACC First Team selection.

A three-time ACC Player of the Week selection, James was the only player in the league to score in double figures in every game this season and had more 30-point (5) and 20-point (17) games than any other player in the ACC.

The honor marks James’ second AP Honorable Mention All-America selection. During her freshman season in 2002-03, she garnered the distinction after becoming the first freshman in the history of the BIG EAST to lead the league in scoring.