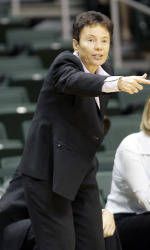 CORAL GABLES, Fla. – The ninth-seeded University of Miami women’s basketball team will take on eighth-seeded Georgia Tech in the opening first-round game of the 2005 ACC Women’s Basketball Tournament Friday, March 3 at 11 a.m. at the Greensboro Coliseum in Greensboro, N.C.

The Game
The ninth-seeded Hurricanes will square-off with eighth-seeded Georgia Tech Friday morning at 11 a.m. in the opening first-round game of the 2005 ACC Women’s Basketball Tournament at the Greensboro Coliseum in Greensboro, N.C. The game will mark the second meeting this season – Georiga Tech won the first, 62-46, January 23 in Coral Gables – and the fifth meeting all-time between Miami, who leads the all-time series at 3-1, and the Yellow Jackets. Friday’s game will be televised live on the ACC’s Regional Sports Network (Fox Sports Net, Sun Sports, Comcast) with Mike Hogewood calling play-by-play and Charlene Curtis providing color analysis. The game will also be broadcast live on WVUM (90.5 FM) with Jeremy Marks-Peltz and Ben Wolff bringing the action from Greensboro. For ticket information please contact the Hurricane Ticket Office by calling 1-800-GO-CANES or visit www.hurricanesports.com.

The Hurricanes
After back-to-back wins over Virginia Tech and Virginia, 17th-year head coach Ferne Labati and the Hurricanes have lost four-straight, including a 95-61 loss at Duke last Thursday and a 90-45 loss at Virginia Tech Sunday to close out the regular season. UM went through a five-game skid earlier this season, but in school history has never lost five-straight twice in the same season. As a team, Miami is holding opponents to 69.5 points per game this year, but scoring just 64.4 points per game in what could be their first losing season since the 2000-01 campaign when they posted an overall record of 13-15. Leading the UM scoring attack is junior All-America candidate, Tamara James who enters the tournament as the nation’s second-leading scorer with 22.9 points per game. James also leads the Hurricanes in rebounding with 6.6 boards per game and tops the UM roster in field goal percentage, shooting 48.4 percent from the floor. Senior Yalonda McCormick is second on the team in scoring with 12.9 points per game and has averaged 15.2 over the last five games. McCormick also ranks second in the ACC in assists (6.04 apg) and is fourth in the league in steals (2.62 spg). Sophomore Imani Dhahabu is Miami’s second-leading rebounder, grabbing 5.1 per game to go along with her 5.9 points per game. Dhahabu has played well down the stretch for the Hurricanes, averaging 9.5 points and 6.0 rebounds over the last eight games. Freshman Albrey Grimsley ranks third among the Hurricanes with 6.3 points per game and senior Fallon Phanord has recorded career-best in every category and joins James as the only two players to start all 27 games this season.

The Yellow Jackets
Second-year head coach MaChelle Joseph and the Yellow Jackets drew the ACC Tournament’s No. eight seed with an overall record of 13-13 and a 4-10 mark in ACC play. Georgia Tech heads to Greensboro having lost eight of their last nine games and have averaged just 51.9 points while giving up an average of 65.0 pints during that stretch. The Yellow Jackets bolster one of the leagues’ best defenses allowing just 57.9 points per game – fourth in the league – and just 37.9 percent shooting – third in the ACC. They are led by a pair of underclassmen in sophomore Stephanie Higgs who averages a team-high 13.7 points per game and freshman Chioma Nnamaka who has netted 12.8 points per contest. Junior Jessica Williams leads the team in rebounding with 7.0 boards per game.