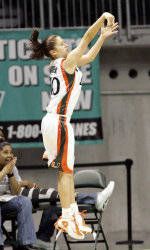 BLACKSBURG, Va. – The University of Miami women’s basketball team was overpowered by a Virginia Tech team that shot 54.1 percent from the field with all five starters scoring double figures as the Hokies (17-10, 6-8 ACC) downed UM (12-15, 4-10 ACC), 90-45, at Cassell Coliseum in the Hurricanes regular season finale.

Led by Kerri Gardin’s game-high 16 points, the Hokies overtook the Hurricanes in nearly every statistical category including rebounding (47-to-27), points in the paint (40-to-24) and three-point percentage (50.0-to-21.1.)

Virginia Tech opened the game on an 8-0 run and led by 22 at 26-4 ten minutes into the game. The Hokies maintained a 20-plus margin lead for the remainder of the half, heading into the intermission with a 47-20 lead.

The second half wouldn’t fair any better for the Hurricanes, as Virginia Tech went on to cruise to the 90-45 victory.

Junior Katie Hayek led the Hurricanes with 13 points followed by classmate Tamara James who surpassed former UM great Octavia Blue to move into fourth-place all-time in scoring at UM with 12 points against the Hokies.

The Hurricanes will prepare for the 2005 ACC Women’s Basketball Tournament beginning March 4 running through the championship game March 7. Pairings for the tournament will be announced Monday.