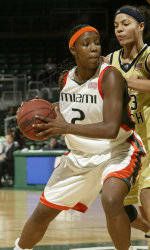 The Game
The Hurricanes head to Blacksburg, Va. Sunday to take on fellow ACC-newcomers, Virginia Tech in the regular-season finale at Cassell Coliseum at 1 p.m. Sunday’s game will mark the sixth meeting all-time between the Hurricanes and Hokies – UM leads the all-time series at 4-2 – and the second meeting this season. Miami won the first meeting this season, downing Virginia Tech, 78-67, Feb. 6 in Coral Gables. Sunday’s game will be televised live on the ACC’s Regional Sports Network (Fox Sports South, Sun Sports, Comcast) with Mike Hogewood calling play-by-play and Charlene Curtis providing color analysts. The game will also be rebroadcast via tape-delay on WVUM (90.5 FM) immediately following the UM-George Washington baseball game with Doug Kroll and Mike Garcia bringing the action from Blacksburg.

The Hurricanes
The Hurricanes are 4-4 in their last eight games with wins over Florida State, Clemson, Virginia Tech and Virginia. Each of UM’s four losses during that span have come at the hands of ranked opponents, falling NC State, Maryland and Duke (twice) and three of those loses were by an average of 5.7 points. The Hurricanes have struggled on the road this season, posting an overall record of 3-9 in games on the road or at neutral sites, but have won two of their last three away from the Convocation Center. UM is averaging 65.2 points per game this season and are shooting 40.9 percent from the field and 31.0 percent from beyond the three-point line. The Hurricanes are led by the nation’s leading scorer, junior Tamara James who averages 23.3 points per game this season. With 26 points last time out against Duke, James moved into fifth place all-time in scoring at UM with 1,721 points and needs just four points to move into fourth place all-time. James also leads the team in rebounding with 6.6 boards per game. Senior Yalonda McCormick is second on the team in scoring with 13.0 points per game and is second in the ACC in assists (6.2 apg) and third in the conference in steals (2.7 spg). Sophomore Imani Dhahabu has played well of late, averaging 10.3 points and 6.6 rebounds over the last seven games compared to her season average of 6.0 points and 5.2 rebounds per game.

The Hokies
First-year head coach Beth Dunkenberger and the Hokies play host the UM Sunday with an overall record of 16-10 and a 5-8 mark in ACC play. Virginia Tech upended No. 22 Maryland, 87-79, in College Park, but have lost four of their last six games. The Hokies have four players averaging double figures in scoring this season, led by senior Erin Gibson’s 11.3 points per game. Junior Kerri Gardin is third in scoring with 10.7 points per game and leads the Hokies in rebounding with 8.1 per game. Virginia Tech boast one of the ACC’s best three-point shooting teams, ranking second overall in team three-point percentage (.348) led by junior Carrie Mason who is hitting 41.6 percent from beyond the arc.