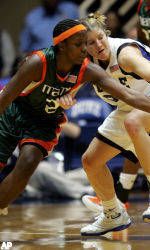 DURHAM, N.C. (AP) – Mistie Williams had 23 points and eight rebounds for second-ranked Duke, which scored the first 10 points in a 95-61 victory Wednesday night over Miami.

Duke is one win away from earning the top seed in next week’s ACC tournament for the fourth straight year and sixth time in seven seasons. The Blue Devils close the regular season at home Sunday against No. 8 North Carolina, hoping to avenge their only conference loss.

Tamara James scored 26 points to lead Miami (12-14, 4-9), which couldn’t stop the Duke offense and struggled for good shots throughout the game. The Blue Devils made 57 percent of their shots and led by as many as 42 points.

Miami had lost consecutive close games against ranked teams, falling to North Carolina State and Maryland by a combined eight points. But the trip to Cameron Indoor Stadium quickly turned into a rout, with the Blue Devils knocking down outside shots and dominating inside.

Duke never stopped attacking, even as the game grew more one-sided. Little went right for the Hurricanes, with coach Ferne Labati earning a technical foul with her team down by 57-28 with 16:04 left.

The 6-foot-3 Williams was virtually unstoppable inside, scoring 14 points on 7-for-9 shooting in the first half. Chante Black, a 6-5 freshman, added six rebounds, helping Duke take a 20-9 edge on the glass en route to a 46-26 halftime lead.

Duke also went 5-for-8 from 3-point range in the half, with Foley and Wanisha Smith hitting two 3s apiece.

Duke did all that despite Currie – who averages 17 points and seven rebounds – going to the bench with her third foul with 8:17 left before the break. Currie had six points in the half, but probably needed the rest because she’s been playing with a stress fracture in her left foot for the past three weeks.