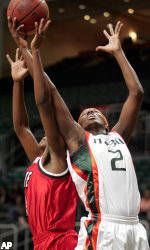 Finding themselves down by three at 66-63 with 3:26 left to play, the Hurricanes cut the NC State lead to one once again at the 1:27 mark of the second half when Tamara James, who finished with a team-high 23 points, found teammate Imani Dhahabu on the baseline for an open lay-up to score two of her career-best 15 points.

Dhahabu also drew a foul on the play and hit the following free throw to complete the three-point play, tying the score at 66-all.

Dhahbu picked a Khadija Whittington pass seconds later to give UM the ball and the Hurricanes took advantage of the opportunity, moving ahead, 68-66, on a James bucket with 48 seconds showing on the clock.

NC State headed down the floor on the next possession and set up a three-pointer for Marquetta Dickens, who finished with 14 points and a game-high seven rebounds.

Dickens’ shot missed and the two teams battled for the rebound, which was eventually called out-of-bounds on the Hurricanes, giving NC State possession with 27 second remaining.

Bell kicked the ensuing in-bounds pass to Stockdale on the left wing and the High Point, N.C. native took the pass and stepped up to knock down the eventual game-winning three-pointer while giving the Wolfpack the go-ahead 69-68 basket.

The Hurricanes moved the ball down-court and called a time out with 12 seconds left to play, setting up an attempt to answer the Stockdale three, but NC State forced a turnover on the in-bounds and regained the ball.

With UM forced to foul, the Wolfpack’s Billie McDowell, who led all scorers with 26 points with a 6-of-10 performance from beyond the arc, then pushed NCSU ahead, 71-68, on a pair of free throws with nine seconds remaining.

James raced down court in the final seconds and dished it to Yalonda McCormick for a three, but the shot missed on the right side of the rim as time expired, sealing NC State’s fourth-straight road win.

Led by James’ 9-of-13 outing and McCormick’s 20 points on an 8-of-11 performance from the field, the Hurricanes shot a season-high 58.0 percent, but managed to go to the free throw line just three times on the night.

The win marks NC State’s second of the season over the Hurricanes – NC State won 73-59 over UM Jan. 20 in Raleigh – as the Wolfpack join Duke as the only two teams in the ACC with just one road loss on the year and take sole possession of second-place in the ACC standings behind the Blue Devils.

In one of UM’s closest games of the season, the Hurricanes and Wolfpack traded the lead a total of 16 times in the game.

The Hurricanes return to action Thursday, hosting No. 20 Maryland at the Convocation Center at 7 p.m. while NC State takes on No. 24 Florida State in Raleigh.