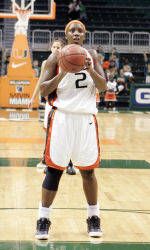 CORAL GABLES, Fla. – Junior Tamara James of the University of Miami women’s basketball team was named the ACC Player of the Week for the second consecutive week as released by the Atlantic Coast Conference Monday.

James, who drew weekly ACC honors for the third time this season, recorded her second-consecutive and ACC-leading fifth 30-point game of the season Thursday night at Virginia, scoring 31 points in a 66-60 victory over the Cavaliers at University Hall.

As UM trailed 52-51with 3:57 remaining against UVa, the Dania, Fla. native led the Hurricanes to the win by single-handedly out-scoring the Cavaliers 12-8 down the stretch to seal the 66-60 victory.

She finished with nine rebounds and five steals against Virginia while going 9-of-11 from the free throw line, including hitting six free throws in the final three and a half minutes