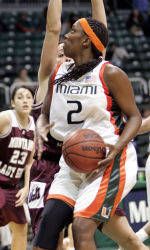 James, who entered the game as the nation’s second-leading scorer, led all players with 31 points, marking the fifth time this season and the second-consecutive game she in which she has topped the 30-point plateau, and with nine rebounds, fell just shy of her third double-double on the year in the Hurricanes’ (12-11, 4-6 ACC) second-straight ACC road victory.

Virginia’s (16-8, 5-5 ACC) Brandi Teamer, who finished with a team-high 23 points and 12 rebounds, scored eight points in the games’ first eight minutes to give UVa an early 12-9 lead.

The Hurricanes, who shot 46.2 percent from the field in the first half, pulled ahead midway through the half, putting together a 12-2 run under the 10-minute mark while holding Teamer scoreless for the remainder of the half to take a 27-22 lead into the intermission.

UM kept the Cavaliers at bay for the majority of the second half, but Virginia chipped away at the Hurricane lead behind a 7-0 run.

UVa cut the Miami lead to two at 47-45 when Denesha Kenion stepped in front of junior Katie Hayek’s pass and took it in to score with less than seven minutes remaining.

Teamer put the Cavilers within one point of the lead just over a minute later, penetrating through the UM lane on a lay-up.

McCormick answered on UM’s next possession down the floor, hitting a three from the corner to quite the UVa crowd and put the Hurricanes up by four at 51-47 with 5:22 left to play.

UVa moved ahead 52-51 with 3:57 remaining when Takisha Granberry hit a three from the foul-line extended to give the Cavaliers their first lead since the 10:40 mark of the first half.

James hit a pair of free throws with three-and-a-half remaining, giving UM a 53-52 lead and went on to score UM’s next eight points to push the Hurricanes ahead 60-55 with 38 seconds left to play.

The Hurricanes held the Cavaliers off for the remainder of the game, going on to win, 66-60.

Senior Yalonda McCormick added 14 points and 10 rebounds in the UM win, recording her second-straight double-double, and sophomore Imani Dhahabu turned in 10 points for the Hurricanes.

The Hurricanes will return Coral Gables to take on NC State Monday, February 14 at the Convocation Center with a scheduled 7 p.m. tip-off..- 30 –