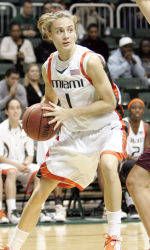 Hurricanes Head to Charlottesville for Thursday Tilt with Virginia

The Hurricanes will head to Charlottesville, Va. Thursday evening to take on ACC-rival Virginia at University Hall. This will mark the second meeting all-time and the first meeting since 1987 between the Hurricanes and the Cavaliers, who won the previous meeting 78-69 in Coral Gables. Thursday’s game will be carried live on the airwaves on WVUM (90.5 FM) with Jon Sanford giving play-by-play and can be heard live on www.hurricanesports.com which will also provide live stats and scoring.

The Hurricanes head to Charlottesville having won three of their last four games, including a 78-67 victory over fellow ACC-newcomers Virginia Tech Sunday afternoon in Coral Gables. With an overall record of 11-11 and a 3-6 mark in ACC play, the Hurricanes currently sit ninth place in the ACC and just a half-a-game behind Virginia Tech. UM is averaging 65.2 points per game on the season, but have scored an average of 74.7 points over the last three games, shooting 45.0 percent from the field in the last three games compared to their season average of 40.2 percent. Junior Tamara James leads the team and is second in the nation in scoring, averaging 22.7 points per game. The National Player of the Year candidate was named the ACC Player of the Week for the second time this season Monday after averaging 25.0 points in three games last week, including a 35-point outing against the Hokies. Senior Yalonda McCormick is second in the ACC and ninth in the nation in assists, dishing out 6.52 per game, and ranks second in the ACC in steals with 3.05 per game. McCormick is also second on the team in scoring with 12.3 points per game. Sophomore Imani Dhahabu has been a force over the last three games, averaging 7.7 rebounds per game and has averaged 8.3 points in UM’s last three games. Junior Tatjana Marincic has provided a spark off the bench over the last five games, scoring 8.4 points a game which is nearly double her 4.5 season scoring average.

In her 28th season at the helm of the Virginia women’s basketball program, head coach Debbie Ryan and the Cavaliers have posted an overall record of 16-7 in 2004-05 and a 5-4 mark in ACC play. UVa has their last two games, falling 62-56 at No. 25 NC State Feb. 3 and most recently 76-56 against No. 8 North Carolina Monday night. The Cavaliers are led by seniors Brandi Teamer, who is averaging 12.6 points per game this season, and LaToya Blue, who is turning in 15.6 points per game in ACC play and is scoring 12.2 points per game overall on the year. With 6.0 rebounds per game each, Teamer and Blue combine for 12 rebounds a game while senior Jocelyn Logan-Friend leads the team with 6.4 boards per game.