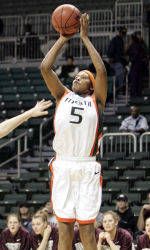 The University of Miami women’s basketball team will host Virginia Tech Sunday afternoon at 4 p.m. at the Convocation Center.

The Game
The Hurricanes will welcome fellow ACC-newcomers Virginia Tech to the Convocation Center Sunday afternoon for a 4 p.m. tip-off. This will mark the sixth meeting all-time and the first meeting as members of the ACC between the Hurricanes, who lead the series at 3-2, and the Hokies. UM downed Virginia Tech in the last meeting, a 65-56 decision in Blacksburg, Va. last season. Sunday’s game will be broadcast live on WVUM (90.5 FM) and can also be heard live on www.hurricanesports.com, which will also feature live scoring and stats. Tickets are $5 for adults and $3 for children and seniors and can be purchased through the Hurricane Ticket Office at 1-800-GO-CANES or online at www.hurricanesports.com.

The Hurricanes
The Hurricanes will look to rebound from a disappointing 72-63 loss to No. 3 Duke Thursday night against the Hokies Sunday. UM is 8-3 at home this season with all three losses at the hands ACC opponents. Miami is led by National Player of the Year candidate, junior Tamara James, who is averaging an ACC-leading 22.1 points per game. James also leads the Hurricanes in rebounding, pulling in 6.9 boards per game. Senior Yalonda McCormick is second on the team in scoring, averaging 12.3 points a game this season and 17.7 points over the last three games. McCormick is second in the ACC in assists (6.3 apg) and steals (3.2 spg). Sophomore Imani Dhahabu is second on the team in rebounding with 5.1 per game and has hauled in 8.7 rebounds per contest in UM’s last three games. Freshman Albrey Grimsley leads all underclassmen in scoring, averaging 7.3 points a game in 18 starts this season while senior Fallon Phanord continues to have the best season of her career. The Hurricanes have also had production off the bench in the last three games with junior classmates Tatjana Marincic and Katie Hayek combining for 14.3 points per game.

The Hokies
First-year head coach Beth Dunkenberger and the Hokies head to Coral Gables with an overall record of 14-6 and a 3-4 mark in conference play. Three of Virginia Tech’s ACC losses have come at the hands of opponent who are currently ranked or have spent time in the top-25 this season. The Hokies boast the ACC best scoring offense in conference games, averaging 74.1 points a game in league play this season and lead the ACC in three-point percentage, hitting 35.8 percent from beyond the arc. Senior Erin Gibson leads the team in scoring, averaging 11.8 points per game followed by junior Carrie Mason, who is scoring 11.1 points per game. Junior Kerri Gardin leads the Hokies in rebound with 6.9 per game.