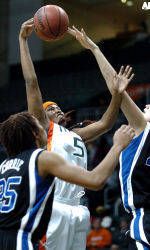 CORAL GABLES, Fla. (AP) – Jessica Foley and Monique Currie made sure Dukepassed a tough test on the road.

Foley scored 17 points and Currie added 15, leading the No. 3 Blue Devilsover Miami 72-63 on Thursday night for their third consecutive victory.

The Hurricanes played well in stretches, but Duke’s superior shooting provedto be too much.

Foley, who had been mired in a 4-of-20 shooting slump the last three games,connected on six of 11 shots, including four of eight from long range againstMiami (10-11, 2-6).

“I got some good looks, and I needed to make them,” Foley said.

After falling behind 5-0 to open the game, Miami rattled off a 16-5 runbehind eight points from Tamara James, who led the Hurricanes with 18 points.The junior forward’s 3-pointer at 12:04 of the first half gave the Hurricanes a16-10 lead.

That proved to be Miami’s largest lead of the game, and Currie put Duke up19-18 with a jumper less than four minutes later.

“I think that was important,” Duke coach Gail Goestenkors said. “I thinkthey were gaining confidence, especially early on.”

The teams exchanged leads twice over the next 4:48, but Duke scored thefinal 12 points of the half to take a 33-23 lead into the locker room.

“We let down for like five minutes at the end of the first half, and ithurt our outcome,” Labati said. “We made some runs at them; they came rightback. At the end of the game, we just needed one more run, and we didn’t getit.”

The Hurricanes pieced together a 14-6 run to close the gap to 54-46 with8:24 remaining. Yalonda McCormick shaved the lead to 56-50 on a layup at 7:15,but Foley and Currie hit back-to-back 3-pointers to spark a 9-0 Duke run thatessentially put the game out of reach.

Miami got to 65-59 on a basket by James with 3:23 remaining, but scored onlyfour points after that.

“Just give Miami a lot of credit,” Goestenkors said. “There were a coupleof times where I thought we had them down and out, but they kept fightingback.”