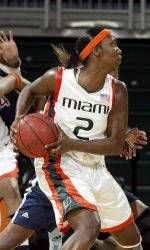 Hurricanes Take on No. 3 Duke Thursday at the Convocation Center

CORAL GABLES, Fla. – The University of Miami women’s basketball team will take on No. 3 Duke Thursday night at 7 p.m. at the Convocation Center. For ticket information, please contact the Hurricane Ticket Office at 1-800-GO-CANES.

The Game
The Hurricanes will play host to No. 3 Duke Thursday night at the Convocation Center with a 7 p.m. tip-off. This will mark the first meeting between the Blue Devils and Miami. The game will be carried live on WVUM (90.5 FM) with Jeremy Marks-Peltz and Eric Kalis calling the action and can also be heard on the web at www.hurricanesports.com, which will also feature live scoring and stats. Tickets are $5 for adults and $3 for children and seniors and can be purchased through the Hurricane Ticket Office at 1-800-GO-CANES or online at www.hurricanesports.com.

The Hurricanes
Miami returns to Coral Gables following an 83-69 at Clemson Sunday night in their last outing, earning their first true road victory of the season and their second-straight ACC win. The Hurricanes have been nearly unstoppable at home this season, boasting an overall record of 8-2 in games at the Convocation Center while shooting 43.4 percent from the field on their home floor. National Player of the Year candidate, junior Tamara James leads the ACC and is second in the NCAA in scoring, averaging 22.4 points per game. James also leads the Hurricanes in rebounding, averaging 6.9 per game and has pulled down 7.7 per contest in ACC play. Senior Yalonda McCormick is second on the team in scoring with 12.2 points per game and is second in the ACC in steals with 3.2 per game and is 10th in the nation in assists, averaging 6.3 per game. Sophomore Imani Dhahabu, who averages 4.8 points and 5.1 rebounds per game, had a career day at Clemson, recording the first double-double of her career with 13 points and 12 rebounds in the win over the Lady Tigers. Freshman Albrey Grimsley has stepped up against ranked teams this season, averaging 12 points a game versus top-25 teams compared to her season average of 7.3 points a game and senior Fallon Phanord has produced career-best in nearly every category this season.

The Blue Devils
Head coach Gail Goestenkors and the third-ranked Blue Devils head to Coral Gables with an overall record of 20-2 and a 6-1 mark in ACC play. Duke spent the past three weeks at No. 1 in the AP poll before falling to North Carolina, 56-51, Jan. 24 in Chapel Hill, but have beaten No. 20 Maryland and No. 25 NC State since the loss to UNC. The Blue Devils lead the nation in both defensive field goal percentage (.320) and blocked shots per game (8.5) and are fourth in the nation in scoring margin (+23.8). Duke has four players averaging double figures in scoring this season led by National Player of the Year candidate, junior Monique Currie, who averages 18.5 points per game. Currie also leads the team in rebounding, averaging 7.8 per game. Sophomore Alison Bales ranks fifth in the nation and leads the ACC with 3.9 blocks per game.