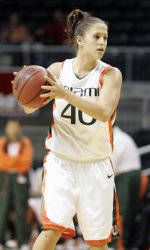 Led by Hayek, who went 5-of-10 from behind the three point line, the Hurricanes out-shot the Lady Tigers by nearly 20 percent, hitting 53.7 percent from the field compared to Clemson’s 34.8 percent.

Clemson held the lead for over five minutes to start the game until UM put together a 15-0 run, holding the Lady Tigers scoreless for over three minutes to take a 23-13 lead and eventually took a 41-31 advantage at the break.

The Lady Tigers fought back with the start of the second half, chipping away at the UM lead and cut the Hurricane lead to two at 59-57 on a jumper by Maxienne White with just under 10 minutes remaining.

Clemson’s Amanda White tied the game at 59-all just seconds later on a pair of free throws.

The Hurricanes answered the Tigers’ comeback with a 13-0 run spanning over the next six minutes to move ahead 72-59 and wouldn’t let Clemson within nine points of the lead for the remainder of the game, going on to win 83-69.

Junior Tamara James led all scorers with 22 points, hitting 7-of-12 from the field, despite playing just 26 minutes, and senior Yalonda McCormick finished with 15 points and nine assists in the Hurricanes’ second-straight ACC victory.

White led the Tigers with 14 points and 12 rebounds on the night followed by D’Lesha Lloyd, who had 14 points.

The Hurricanes return to action Thursday, February 3, hosting ACC rivals, Duke, who are currently ranked first in the country, at the Convocation Center at 7 p.m.