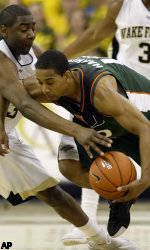 Justin Gray finished with 20 points and the Demon Deacons (17-3, 5-2 Atlantic Coast Conference) cruised in the second half to improve to 10-0 at home less than 48 hours after a heartbreaking, overtime loss at Georgia Tech. Jamaal Levy scored 15 points.

A winter storm dropped several inches of snow and ice in Winston-Salem, leaving several hundred empty seats at Lawrence Joel Coliseum. Wake Forest’s defense also was a no-show in the first half, allowing the Hurricanes (13-6, 4-4) to shoot 56 percent – including 91 percent (10-of-11) on 3-pointers – and take a 49-48 lead at the break.

Anthony Harris, averaging 12.4 points coming in, beat that total about 10 minutes into the game and had 18 of his career-high 28 in the opening 20 minutes. Guillermo Diaz added 14 of his 21 before the half.

It was tied at 63 before the Deacons finally took control. Williams started a 16-4 run with a dunk in traffic, and Chris Ellis added one of his own about a minute later. Paul and Gray added 3-pointers, and Strickland drove for an acrobatic layup to put Wake Forest ahead 74-65.

Williams’ hook from in close increased the margin to 12, and Ellis later made his only 3 of the game to make it 84-69, forcing a timeout by Miami coach Frank Haith with about six minutes left. It wasn’t a very good homecoming for Haith, the first-year head coach who spent five seasons as an assistant at Wake Forest earlier in his career.

With shots going in from all over the court in the opening half, Haith must have been thinking about getting a victory in his return. Diaz was 4-of-4 from beyond the arc, Robert Hite was 2-for-2, Harris went 3-of-4 and even Raymond Hicks contributed his first 3-pointer of the season.

He banked an awkward looking jumper from the wing to give the Hurricanes a 46-39 lead with 4 minutes left in the half.

At one point, the Deacons were shooting 80 percent – and trailing by a point. They closed the half on a 9-3 run, capped by a layup from Levy, to cut Miami’s lead to one.

Hite came off the bench for the first time this season and added 18 for the Hurricanes. He was late for practice Friday and was benched for the first 2 minutes.