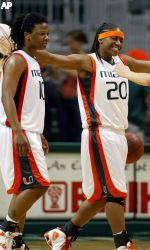 Miami Knocks Off No. 21 Florida State

CORAL GABLES, Fla. (AP) – Yalonda McCormick scored 23 points – including thelast four of the game – to give Miami its first Atlantic Coast Conferencevictory, a 62-57 upset Thursday night over No. 21 Florida State.

Miami ended a five-game losing streak in the series and snapped FloridaState’s overall five-game winning streak. The victory was the first in theseries for ACC newcomer Miami (9-10, 1-5) since the 1988-89 season.

Ganiyat Adeduntan had 17 points and Roneeka Hodges 16 to lead Florida State(18-3, 5-2). Tamara James added 18 points for the Hurricanes, who forcedFlorida State into 19 turnovers.

Trailing for most of the second half, Miami took the lead for good at 52-51on a jumper by James with 5:46 left. The Hurricanes built their lead to itslargest margin at 58-53 with 1:54 to go.

Then LaQuinta Neely and Alicia Gladden responded with consecutive jumpers tocut the deficit to a point. But McCormick made a layup and drew a foul. Shemisfired on the free throw, but Gladden missed a 3-pointer with 21 seconds leftand Miami rebounded.

The Hurricanes went on a 7-0 run before the break cut Florida State’shalftime lead to 31-28. The Seminoles led by as many as 11 points in the firsthalf.