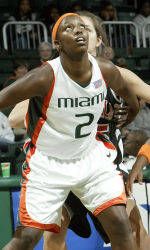 Led by Chioma Nnamaka and Stephanie Higgs, who scored 19 and 18, respectively, the Yellow Jackets (11-5, 2-3 ACC) shot 50 percent from behind the three-point line and 44.2 percent from the field while holding the Hurricanes (8-10, 0-5 ACC) to their second-lowest point total of the season.

With five lead changes in the first nine-and-a-half minutes, the two schools traded baskets early in the game, but the Yellow Jackets took a 30-22 lead into halftime after holding the Hurricanes scoreless in the period’s final three minutes.

UM’s scoring drought would continue for over three minutes into the second half until senior Fallon Phanord smothered a 12-0 run by the Yellow Jackets spanning between the end of the first half and the beginning of the second half with a lay up at the 16:47 mark, bringing the score to 36-24.

Georgia Tech answered Phanord’s basket with six unanswered points and went on to lead by as much as 19 at 47-28 with just over 13 minutes remaining.

The Hurricanes put together a 10-1 run over the next seven minutes, capped off by a jump shot by junior Tamara James, to cut the Georgia Tech lead to 10 at 48-38 with 6:05 left to play, but the Yellow Jackets ended the UM comeback, outscoring the Hurricanes 14-8 for the remainder of the game to go on to the 62-46 victory and hand UM their fifth consecutive loss.

James led the Hurricanes with 17 points and turned in her second double-double of the season with 10 rebounds while junior Tatjana Marincic added 11 points for Miami.