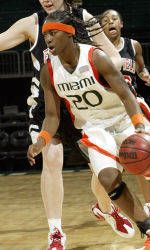 Grimsley scored 13 points in the first half as the Hurricanes took a 36-34 lead into the break following a three-pointer by senior Yalonda McCormick with 28 seconds remaining.

UM opened the second half on a 6-0 run, holding the Wolfpack scoreless for more than three minutes into the half, but NC State answered to tie the game at 46-46 at the 10:57 mark.

The Hurricanes found themselves down by nine at 56-47 with less than eight and half minutes and never pulled within fewer than six points of the Wolfpack lead for the remainder of the game, going on to drop the 73-59 decision.

Along with McDowell, NC State had four players to score in double figures, including Tiffany Stansbury, Khadija Whittington and Rachel Stockdale, who scored 11 points apiece.

The Hurricanes will return to Coral Gables Sunday, January 23, hosting Georgia Tech at the Convocation Center at 4 p.m.