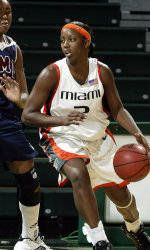 UM Travels to Raleigh to Square Off with NC State

The University of Miami women’s basketball team will travel to Raleigh, N.C. Thursday to take on NC State at the RBC Center at 7 p.m.

The Game
Looking for their first road win and first ACC victory, Miami (8-8, 0-3) heads to Raleigh, N.C. Thursday to take on NC State (13-4, 2-2) at the RBC Center at 7 p.m. This will mark the fourth meeting all-time and the first meeting since 1999 between the Hurricanes and the Wolfpack, who have won each of the three previous meetings. Thursday’s game can be heard live on WVUM (90.5 FM) with Brian Stubits and Ben Wolf calling the action. The game can also be heard live on the web at www.hurricanesports.com which will also feature live stats.

The Hurricanes
Coming off an 83-52 loss at No. 8 North Carolina Monday, UM returns to the Tar Heel state Thursday in search of their first ACC victory. The Hurricanes have struggled on the road this season, averaging almost 10 points less (55.4) in road games compared to their 65.2 points per game overall. Miami is led by All-America and National Player of the Year candidate, junior Tamara James, who, despite being held to a season-low 12 points against UNC, leads the NCAA in scoring with 23.7 points per game. Heading into NC State, she needs just 17 points to become only the sixth player in school history to reach 1,500 career points and just the second player to score 1,500 in her first three seasons, joining UM’s all-time leading scorer (2,358 points), Maria Rivera. James also tops the UM roster this season with 6.9 rebounds per game. Senior Yalonda McCormick is second on the team in scoring, averaging 11.5 points per game and is second in the ACC in steals (3.27) and assists (6.0). Freshman Albrey Grimsley has stepped up as of late, averaging 9.2 points over the last five games while senior Fallon Phanord, who, along with James, are the only to UM players to start every game this season.

The Wolfpack
Head coach Kay Yow returns to the NC State bench Thursday after missing the last two games while treating he recurrence of her breast cancer originally diagnosed in 1987. During Yow’s absence, the Wolfpack’s last two games have been decided by a total of three points with 77-75 loss to No. 8 North Carolina and a 76-75 overtime victory at No. 25 Virginia Tech. NC State is led by Gulf Coast Community College transfer, junior Tiffany Stansbury, who is first on the Wolfpack roster with 11.1 points and 7.1 rebounds per game. Stansbury’s 55.1 percent shooting from the field ranks fourth in the ACC and her 2.0 blocks per game is good for third in the conference. Junior Billie McDowell is second in the team in scoring, averaging 10.2 points per game followed by sophomore Ashley Key, who has produced 9.5 points per game this season.