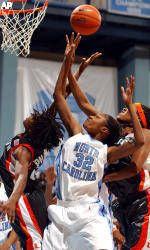 Hurricanes Fall To No. 9 North Carolina

Latta scored 17 of her 24 points in the first half and Little shut downMiami’s Tamara James to lift the ninth-ranked Tar Heels past the Hurricanes83-52.

Little finished with 15 points and seven rebounds for the Tar Heels (14-2,2-1 Atlantic Coast Conference), but her defense against the nation’s leadingscorer was the highlight of an easy league win.

James came in averaging 24.5 points per game, but missed her first eightshots and finished with just 12. She didn’t score until early in the secondhalf, when her team was down 28 points.

“I told (Little), `I just want you to play defense and rebound today, andlet the offense come to you,”‘ North Carolina coach Sylvia Hatchell said. “Ithink her concentrating on that helped her relax a little more and play betteroffensively.”

Little, a 6-foot-1 forward, used her long arms and mobility to give Jamestrouble all day.

“I just wanted to be there whenever she had the ball,” Little said. “Justmake sure I was in her face when she got the ball and couldn’t go anywhere.”

James didn’t score her first basket until a transition layup that made it53-27 with 14:48 left. She finished 4-for-15 from the floor, including 0-for-6from the 3-point arc.

“They were doubling when I caught the ball,” James said. “It didn’tbother me that I didn’t score that much. It’s just the other players have toknock down shots because they’re going to get opportunities.”

Latta certainly got the Tar Heels rolling on the offensive end, going10-for-16 from the field and hitting four 3-pointers.

Not everything went completely smooth for the sophomore. She winced when shesaw her eight turnovers on the box score, and she missed her only free throw,stopping a string of 18 straight.

But the 5-6 point guard got plenty of open looks by constantly moving aftershe gave up the ball.

“All that goes to my teammates,” said Latta, who had seven rebounds, sixassists and three steals. “They were just finding me and I was spotting up.”

Latta got plenty of help early from freshman Erlana Larkins, who scored nineof North Carolina’s first 11 points and had three assists in the first 5{minutes. She finished with 15 points despite twisting her right ankle, whichshe injured in Friday’s win against North Carolina State, late in the firsthalf.

Latta scored 13 consecutive points early to give the Tar Heels adouble-digit margin. She made a pair of 3-pointers off passes from Larkins, andclosed her spurt with a 3 from the left corner that gave North Carolina a 24-10lead with 11:56 left in the half.

On the other end, Little’s defense locked down on James, holding her to ascoreless first half on 0-for-6 shooting.

“We got rattled. We didn’t execute and it really hurt the whole momentum ofthe game,” Miami coach Ferne Labati said. “I think that Carolina is best whenthey’re out there attacking and pressing.”